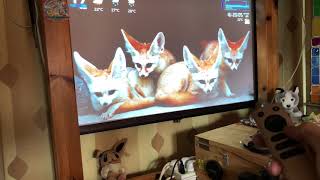 Appotronics S2 is a portable projector that uses unique projection technology by combining laser light with an LED lamp. It’s capable of delivering realistic Full HD and 4K images, allowing you to create a home theater experience on any wall in your home.

The S2 Multimedia Projector is equipped with an aluminum case. The use of this material increases the device’s resistance to damage, which is certainly important if you regularly take the device to a conference or business meeting.

The projector is equipped with a powerful 980 lumens LED lamp. The use of laser DLP-technology, the central element of which is a special matrix of microscopic mirrors (so-called DMD-elements) made of aluminum alloy with a high reflection factor – converts any photo and video content into digital format, providing the best image quality.

One of the features of the Appotronics S2 projector is the ability to place it at the best angle where you will be most comfortable viewing photos and videos. The projector is equipped with a standard USB port, as well as USB 3.0, HDMI, 3.5-mm headphone jack, which allows you to connect the device to external equipment.

In addition, Appotronics S2 allows you to view 3D movies (this requires the purchase of glasses that support this mode), both online and through a connection to other devices. High levels of contrast and brightness can be observed even in a bright room.

You can watch movies online with Appotronics S2 projector pre-installed with Android 4.4 KitKat software, which allows you to install a variety of compatible video viewing applications, including Netflix. In the same way, you can install other programs or games, thanks to an internal 16GB drive.

Appotronics S2 is equipped with a quad-core ARM Cortex A9 processor with 2 GB of RAM and 16 GB of internal memory, as well as a Mali 450 graphics processor, which is quite enough to effectively perform any functions offered by the device.

Appotronics S2 can connect to other devices (Android, iOS and Windows). The projector is also compatible with other peripheral devices such as a keyboard and mouse.

The device comes with a handy remote control that is equipped with a laser pointer, which is convenient for meetings and presentations. All image and projection settings can also be made from the remote control.