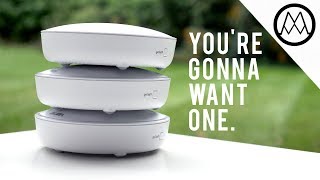 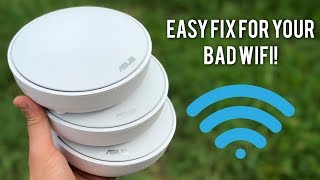 The three-component Lyra system will reduce the number of routers per square meter of your home. The three Lyra components are located in parts of your house, basement or even the infield, and then form a single wireless Wi-Fi network, to which you can now connect any digital devices without worrying about loss of internet connection. The three-component system provides a large coverage area for a wireless Wi-Fi network. Automatic connection of the client device to that node of the system, which will provide the strongest wireless signal. Built-in information protection AiProtection. Application ASUS Lyra for quick setup of the system, its diagnostics and management of network traffic. Parental control function for monitoring and managing Internet access of each family member.

Mesh-solutions for the house – a large such a house – now do everything to anyone not laziness. It is not surprising, because the main market for such kits are developed countries with predominantly one-two-story buildings, where people prefer private houses to apartments. It can not be said that before that, the problem of Wi-Fi coverage in houses of several hundred meters (plus a plot) was not solved. We saw a lot of “horned” routers with powerful access points, which, however, are not always “finished” to some corners and through the overlap. Seen and repeaters, who either halved the speed of the wireless channel, or interfered with themselves. Non-poor users, having suffered with all this, ordered the planning and installation of multiple access points with a separate controller, which do not “clog” the signal of each other and provide a smooth transfer of connected clients from one point to another. There were other options – too, or expensive, or not the best way to work.

What changed? Chipsets of a new wave began to support at once three ranges of Wi-Fi: one in 2.4 GHz and two in 5 GHz. Well, they became faster, of course. So there was a good idea to use the least loaded of these ranges to create a core network that connects multiple access points. Well, they, in turn, are already giving a signal to the client devices. ASUS Lyra , like similar products from other manufacturers, uses exactly this scheme of work. One of Lyra’s devices is designated as the main one – it connects to the Internet. And all the other Lyra are connected either to the main point, or along the chain to each other. And in advance to predict exactly how the chain will be arranged, it is difficult. During the test, moving one access point just a meter resulted in a change in the configuration of the core network.

All devices Lyra look the same – it is a round convex “washer” with a diameter of 150 mm and a height of 50 mm. Under the upper opaque lid is an array of RGB-LEDs that glow in different colors depending on the state of the Lyra. When turned on, they shimmer with different colors, during normal operation they glow with a pleasant light-blue color, during initialization of connection with other Lyra flashes green, and when problems occur they switch to orange or red. It looks very nice, but with time it gets a bit boring – I want to reduce the brightness or completely turn off the illumination for the night (only for all Lyra devices at once, not separately). You can look at it from the other side – in the role of a night lamp somewhere in the corridor, the Lyra module is also quite good.

Between the lid and the body, a ventilation slit extends all around the circumference. For the same purpose, the bottom of the device is riddled with holes. However, during the test, we were fortunate in the idea that the grilles would not be superfluous at the side too – under the load the device is noticeably heated. No, it’s not critical, but it seems that the components inside the case would be more comfortable with a different cooling configuration. And certainly when attaching the Lyra to the wall with the help of two notches under the screws from the bottom it is not necessary to tear off the rubber feet, so that the body is more closely attached, because in this case the air flow will be blocked. On the bottom there is also an information sticker and a slightly recessed reset button.

If you fix Lyra vertically, then the connectors in a small notch on the case will look down. There are three of them: the power supply socket and two Gigabit Ethernet ports. In case of a set of several modules, the main one will have a blue sticker with the inscription Start near the block of ports. It is with him that you need to start installing Lyra: the cable of the ISP can be connected to any port (the device will remember it ), and then you can connect the power cord. After the initial setup of all the parameters, you can add other Lyra devices to the network. This is easy: just hold the Pairing button on the main module for three seconds and wait for it to start flashing green. Then, in the same way, hold Pairing on the other module and wait for the change in the back light. Repeat with the rest of Lyra.

The manufacturer recommends that the modules be arranged so that they are in pairs in direct line of sight from each other. Or at least with a minimum of obstacles. In an extreme case, after the initial configuration, you can combine the modules and over a wired network for better stability. Absolutely from the wires, of course, do not get rid of – the food is still on the cable. A universal compact 24 Watt power supply is supplied with each device. It is designed for a network of 100-240 V 50/60 Hz, but – in our case – is equipped with a “flat” plug type A. The length of the power cable is 170 cm. Also included are a one and a half meter flat patch cord and a standard set of papers: warranty card , a brief instruction and a leaflet with technical support contacts. The Lyra kit sent to the test was clearly released for the US. Perhaps in Russian supplies and BP with the usual fork type C, and all the information in Russian.

The hardware of Lyra has an unusual configuration, and this explains its heating. The device has a Qualcomm IPQ4019 processor (4 × ARM Cortex-A7 with a frequency of 717 MHz), an additional radio module QCA9886 and a module Bluetooth 4.0 BLE AR3012 / IS1678SM. The capacity of flash memory for firmware is 128 MB, and the amount of RAM is 256 MB. ASUS Lyra is based on the platform Qualcomm Wi-Fi SON (Self Organizing Network), presented in the beginning of 2016. There are seven antennas inside the device. Each Lyra module offers one 802.11n access point of 2.4 GHz (up to 400 Mbps, 256-QAM, 40 MHz, channels 1-11) and two 802.11ac 5 GHz access points (up to 867 Mbps each, 80 MHz , channels 36-48 and 149-161), that is, belongs to the marketing class AC2200. The top 5 GHz channels are very well used for the organization of a backbone network between modules, since they are even allowed in the Russian Federation, but in fact they are still not supported by many client devices, and therefore are the most free.