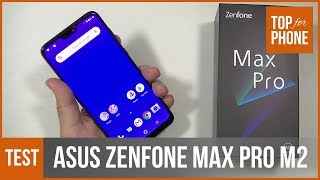 ASUS has unveiled its second generation of ZenFone Max and ZenFone Max Pro series smartphones. The new models have a completely redesigned design with thinner frames and an enlarged display diagonal. Also, the manufacturer has improved the technical characteristics of the gadgets. Special changes have been made to the processor and cameras.

Smartphones received a similar design with minimal frames and a neckline in the display. The usual ZenFone Max M2 has a metal back cover, and the ZenFone Max Pro M2 has a glossy plastic with a shimmering effect. The Pro version features the latest sixth-generation hardened Gorilla Glass in front of the truck, with increased durability and scratch-resistance.

ASUS ZenFone Max Pro M2 was equipped with a widescreen 6.3-inch 19:9 aspect ratio display and Full HD+ resolution. Thanks to its thin frame, the screen occupies 88% of the front panel area. In addition to the diagonal, NTSC’s color gamut has increased from 85% to 94%.

“The heart of the smartphone is the Snapdragon 660, an eight-core processor with artificial intelligence technology. Compared to the ZenFone Max M1, which is based on the Snapdragon 430, the performance has tripled. With a battery capacity of 5000mAh, the manufacturer says it will last for two days of full use without recharging or 22 hours of continuous video playback.

Noticeable changes touched the camera. In ZenFone Max Pro M2 it is double with 13MP (IMX486) and 5MP sensors. The second module is used to analyze the depth of field when shooting in portrait mode with background blurring. Thanks to its bright f/1.8 aperture lens, the smartphone is able to take high-quality photos even in low-light conditions. The camera supports artificial intelligence and is able to identify scenes to set the optimal shooting parameters.

Other useful changes include the five-magnetic multimedia speaker in the ZenFone Max Pro M2, which is 41% louder, 12% purer and 14% clearer than the ZenFone Max Pro M1. In addition, the triple combo slot allows two SIM cards and an micoSD card to be used simultaneously without the need for a choice between them.