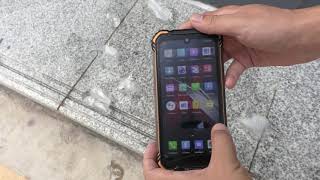 Introducing the DOOGEE S58 Pro, the toughest model with triple cameras from DOOGEE! It’s an inexpensive but triple camera with macro, a fingerprint sensor with high durability, and one that’s perfect for sub, survival, and DIY support tool applications!

The DOOGEE S58 Pro ranks around the low-end to mid-range of performance at launch! Comfortably running high-load operations such as 3D games and 2D games that use physical operations seems to be tough, but with 6GB of memory (RAM), which is as large as mid-high to high-end, you won’t feel too dissatisfied if you use it on a daily basis!

The storage capacity is also large at 64GB, so you don’t have to worry about running out of space after a long period of use, which is often the case with low-performance, low-priced smartphones.

The first thing you’ll think of when you see the DOOGEE S58 Pro is the “really rugged” feeling! It’s a very cool look that lets you feel it to the fullest. It’s rugged and not shiny, and the side cuds have several protrusions that give it a thick and rugged look, just like an off-road tire.

This DOOGEE S58 Pro is as durable as it looks! It’s got the U.S. military standard MIL-STD-810G, and it’s so much more rugged than a regular phone! It’s 2 meters on the flat ground and 1.5 meters on the bumpy ground, so you can fall from anywhere in 360 degrees!

It also has the highest waterproof and dustproof rating, IP68, and can last for up to 24 hours when submerged in water as deep as 1 meter! This is amazingly durable! It’s definitely sturdy, at least for everyday use, and definitely safe!

Plus, it can withstand up to 70 degrees Celsius at very high temperatures, and it can even operate at minus 55 degrees Celsius in extremely cold temperatures! The level of durability is too great to be found in precision equipment. What in the world would you have to design to make it so sturdy?

The DOOGEE S58 Pro’s display has a longer, water droplet notch, making it easier to read the news, social networking, and more for everyday use! However, note that the resolution is HD+ standard, which is a notch lower than the standard FHD. Some people may feel the haze of the dots.

The DOOGEE S58 Pro has a fingerprint sensor located underneath the camera unit! In addition to the convenience of being able to unlock it with just a touch here, the fact that it’s placed in a place where your finger naturally touches it when you hold it in your hand is a nice touch that seems to make it easy to use! I like that the authentication speed is as fast as 0.19 seconds!

Furthermore, this DOOGEE S58 Pro is highly water resistant, so it can be used underwater! It’s very exciting to see what the underwater photos will look like that even the highest end models can’t capture.

The DOOGEE S58 Pro’s battery capacity is plenty large at 5,180mAh! With capacities well above the general standard 3,000~3,500mAh, the battery life is excellent!

Officials say it has a great battery life of up to 24 hours of continuous talk, 16 hours of video viewing, and 550 hours (about 22 days) on standby! With a battery life of this long, it is not only useful for everyday use, but also for outdoor activities such as camping for long periods of time.