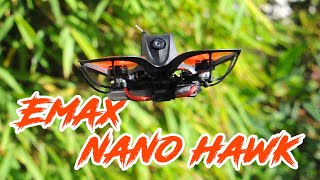 This nano racer completes the Hawk range of the manufacturer Emax. This one is very small, so it is naturally called Nanohawk. It is a little bit larger than the class 65 aircraft (6.5 cm diagonal from engine to engine): Mobula6, Beta65, UZ65, etc. Indeed, it measures 8.8 x 8.8 x 3.5 cm. The scale displays 20.7 grams without battery, so it is a featherweight (a little bit more than the 19 grams announced by the data sheet). What is it really worth? Answer in this chronicle. Note that the Nanohawk was given to me by the manufacturer Emax. As usual, tell me if you think that the practice has influenced my judgment.

Emax knows how to stand out from its competitors with drone structures with slightly different looks, easy to identify at a glance. The Nano Hawk is no exception to this habit. It rests on a lightweight carbon plate that houses the flight controller, a square model. The rest is a plastic structure made of rather nice curves, including the propeller protections. It is fixed on the carbon plate with 4 screws. A fairing covers the central part, to protect the main electronics and hold the FPV camera. This fairing is very indented, which saves weight. It also allows to see everything inside – and there is not much!

The motors are very small brushless 0802 to 19000KV, which drive 1.2 inch four-bladed Avan 1210 propellers (actually 3.1 cm measured by ruler). The wires of the motors run along the carbon structure to join the flight controller on which they are welded. They are held in place with mini rilsan. The flight controller is an all-in-one based on an F4 processor and the Betaflight firmware, present in version 4.2.0, rather recent. It is associated with an ESC 4 in 1 of 5A. The camera is a RunCam Nano3 800TVL with a 140° FOV. It is associated with a 5.8 GHz analog video transmitter with 37 channels and a power of 25 mW (the maximum allowed in France). The video antenna is a dipole, the radio antenna is a strand, both come out of the central fairing at the rear.

The Nanohawk is designed to be powered in 1S, with a single battery. In fact, Emax supplies one of them, a LiHV 1S 4.35 V 300 mAh 160C LiHV 1S that weighs 8.8 grams. Its particularity? It is equipped with an ET2.0 connector. You already know it if you’re a Helicomicro regular, it’s the one that also equips the US65 Pro and DE65 Pro from Eachine (see the test here). By the way, I used the 250 mAh LiHV supplied with the DE65 Pro on the Nanohawk, they work perfectly. On this subject, Emax has taken over the method of fixing the battery of previous models, based on rubber bands. An excellent idea, since without a fixed size hatch, various battery models can be used, including Lipos that have ended up swollen a little.

The Nanohawk I tested is equipped with a FrSky compatible radio receiver integrated to the flight controller. In the Betaflight tab, this translates into a SPI RX Mode receiver in FRSKY_D and FRSKY_X, or FrSky D8 and D16 protocols. I chose to use it in D8 with a small radio control, the T8SG multiprotocol Jumper. To start pairing, it’s very simple: just connect the Nanohawk to a computer (or a smartphone) and use Betaflight Configurator. In the CLI tab, type the command bind_tx. On the radio control, the pairing procedure has to be started. It only takes a few seconds. Note that the microUSB socket is very easy to access, located on the right side of the device, but accessible from above.

If you are familiar with Betaflight, the Nanohawk is only a matter of minutes, the time to choose the arming method, the flight modes, the Flip Over After Crash. Emax took care of the PID settings, with two profiles (1 and 2), the frequency table of the video transmitter, and even the values displayed in the OSD. Actually, there is only the battery voltage, the flight time, and the settings information of the video transmitter. No RSSI, for example. There is no Blackbox on the Nanohawk. Please note that the engines run in the “props in” direction, i.e. the usual direction used by Betaflight.