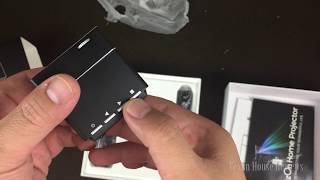 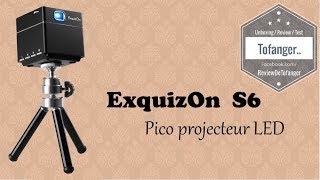 Exquizon S6 is the first pocket projector edged with elegant metal and equiped with stable wifi connection, which could achieve smooth multi-screen display of your mobile devices-Smartphone and Tablets.

Ever heard of a cube projector? No? That’s no reason to despair, because this type of mini beamers is relatively new to the market. This is a full-fledged DLP mini-projector for about 250 €. We have tested the Mini Cube Beamer of ExquizOn in our Mini Beamer Test and how it has cut off you can read in the following review.

Scope of delivery and first impression

In addition to the small cube beamer, a tripod is included, which is not only very practical but in many cases is also necessary to use the mini projector. Because you put this flat on the table is not the entire image displayed, because the image is projected something down. In addition, a power cable, a remote control and an HDMI cable is included. Since the cube Beamer but only has a mini-HDMI connection, you also need a HDMI adapter – luckily, this is also included.

The processing of the beamer looks good at first glance and not cheap. On the remote control one looks for the on and off button in vain, because such a thing does not exist. Why that is so we could not understand until today. There are no batteries included , which is not that bad. But in this projector, you need a round 3-volt button cell , this one does not always have at home on reserve. Requires a “CR2032” button cell.

Directly on the mini projector, there is a power button and the ExquizOn “S6” is ready for use in a few seconds. If you want to let off steam in the settings like other Mini Beamers, you will be disappointed, because the projector can only be set to the language. “German” is also available as language for this mini projector. The menu is clearly arranged and kept simple. The configuration is very fast, because you do not have many options to customize the projector.

For the initial configuration, such as Wi-Fi, image quality and the like. a smartphone is needed. No settings can be made without the smartphone.

In our mini projector review, the setup could only be done via an Apple device. With an Android device you did not even get to the settings. The image transmission from the smartphone, however, was only possible with the Android device without any problems.

The reaction time to the remote control is very good. The operating system on the pocket projector is unknown to us. There are also no pre-installed apps like YouTube and Netflix. It is also no extensions possible, so it can not download apps on the Mini Cube projector.

The projector has a mini HDMI port and a microUSB. An adapter for the Mini HDMI is fortunately included, otherwise many would have a problem with the use. Speakers can also be connected via the headphone jack. Since there is no USB port is a USB speaker, such as the Logitech “Z120”, not connect, we had this tested in our Mini projector test on the devices. A micro SD card slot is also available, but this mini projector does not have an internal memory. Incidentally, the device only supports SD cards up to 64 GB.

The DLP projector has 100 lumens and yet the brightness of this device is somewhat weak. The native resolution is 854 x 480 pixels , which corresponds to a VGA resolution. Although 1080 pixels are possible according to the manufacturer, but in our test we could not confirm such a quality.

Manual focus is difficult to adjust. If you have it focused on the top it is blurred below and you have it focused down it is suddenly out of focus. According to the manufacturer, the device should be up to 100 inches a good picture, in our test, the value was only 80 inches. About the mini HDMI port, the image quality runs flawlessly and over pictures the videos we looked at the Micro-SD ran smoothly.

The sound is, as with all Mini Beamers tested, not very good. In an emergency, you can already run the sound on the projector, but for a home theater experience it definitely does not. The device volume is not particularly loud at around 52 dB, but if you use the built-in speakers of the projector, the 52 dB can be annoying. It is always advisable to connect alternative boxes, of course only if you do not use the device just ToGo.

The ExquizOn “S6” dice projector has a total running time of around 90 – 120 minutes. Built-in is a 2,500 mAh battery. For a movie, the battery should be sufficient. The projector can also be charged via a power bank, so you can avoid that the cube beamer simply goes out during the movie enjoyment.

The Mini Cube Exquizon S6 Pocket Projector is purely a looker by design and something different than the usual mini projector. When using the existing connections has a little blemish. The use of the smartphone is a bit more difficult there, so we deduct a few points for this. Also, the image quality could not convince us one hundred percent, the manual focus can not be set in our opinion perfect. With its connection options, it is already prepared for the future. Since you can download any apps on the projector, the Cube projector is more suitable for people who want to use the device at home on the laptop. In the study as a screen replacement or for a movie night in the living room.