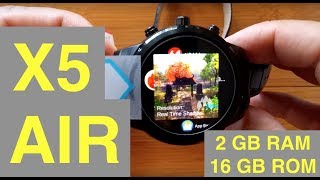 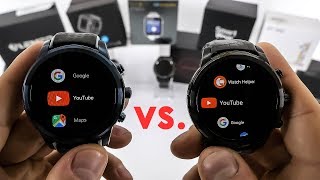 Today we compare watches (with the functions of a full-fledged “smart” gadget on Android OS) with analogues from Sony, LG or Motorola. And this makes sense, because the Finow X5 Air is much cheaper than its competitors. Their price is only $139.99. For this money we get access to the Internet, sending / receiving SMS-messages, calls, work on the 3G network without the need for a smartphone. This is not all. Inexpensive watches will be pleased with the built-in functions for playing sports, the choice of a dial for your taste, original modern design.

The device is equipped with a 1.39-inch round AMOLED type display with a resolution of 400×400 pixels under the hardened Dragontrail glass. The dial of smart watches finow x5 air is developed by new technologies, it is presented in several variants with the possibility of a change. On the side panel are 3 buttons for controlling the clock. The steel case, leather strap make the novelty fashionable, capable of decorating even the adherents of the business style.

The steel case is waterproof class ip55, which protects the inside of the gadget from short-term contact with moisture, but for diving or other water sports it is unsuitable.

There is a gadget based on the mt6580 processor with four cores from the manufacturer MTK at a clock frequency of 1.3 GHz. The size of RAM is 2 GB, which is quite enough to handle calls, messages, installed applications. To store multimedia files, the manufacturer supplied a clock 16 GB of internal memory. The interaction with the user is running Android 5.1. Through Bluetooth 4.0, the device syncs with Android and iOS devices. After pairing, we can receive notifications for hours about messages or phone calls.

The sound is reproduced in several formats: full sound when talking, ringtones, listening to music or video, vibration. Excellent cope with voice playback via built-in speakers, in hands-free mode. On board there is a gyroscope and an accelerometer.

To send and receive information, smart watches operate in a wi-fi network, support GPS, Bluetooth, a full range of 2G, frequencies 2100/1900/850 from the 3G network gsm, WCDMA. Autonomous operation without a smartphone is provided by the support of a nano-SIM card.

To recharge the device simply – just put the charging station USB 5 Pin or by connecting to a PC or laptop via USB 2.0. The battery smart watch finow x5air is notable, with a capacity of 450 mAh. Allows you to use the clock in the talk mode in the network 2G – 3 hours, at 3G frequencies – 2 hours. The interface boasts 26 languages ​​supported, including Russian and English.

Clicking on the screen brings up a window with the choice of creating an SMS message or the ability to make a voice call. In the first variant, the keyboard is unfolded in the chosen language layout, in the second – digits, as in a button phone with a lattice sign, asterisks.

Built-in microphone and speakers ensure the quality of the conversation is similar to the speakerphone through the smartphone. When pairing with the phone, the clock synchronizes contacts, can read data from the SIM card, which greatly facilitates the search for an existing subscriber.

Among the usual applications there is an alarm clock, recorder, timer, etc. The output to the network is provided by the presence of a browser and connection via Wi-Fi. If necessary, enter addresses, data of passwords, logins, search requests, when you click on the corresponding field, the keyboard appears. From popular network applications there is AppStore, social networks, video hosting, Google Play, etc.

Connect the finow x5 air 3g clock with the phone, provided the installed Bluetooth Assistant application , which you need to pre-download. The device can not only connect to the Internet, but also distribute it as an access point to Wi-Fi, using the network parameters of the SIM card operator.

Among the analogues of 3G “smart” watches, this model is the most budgetary solution with excellent characteristics and good speed. Due to the hard strap attachment and the impossibility of changing it, there are certain inconveniences when charging the device, its use. According to the feedback from users, the image quality on the display is severely affected by the sun’s rays.

By accessing the Google Play and AppStore applications on finow x5 air, you can  download games, music, videos, programs, and so on. turn gadget into an entertainment center. The ability to work in full 2G bands and 3G bands allows you to make calls through mobile operators without communication with the smartphone.

To determine the heartbeat frequency of the owner, the smart clock is equipped with a built-in DSP-optical sensor from one infrared and two green LEDs. Due to the CMOS used, the sensor operation requires less power, giving out data with a higher performance than the predecessor.

For lovers of a healthy lifestyle and active strength exercises, the built-in pedometer calculates the distance traveled, the number of steps taken and burned calories. These data can be recorded and stored if desired.

Excellent support for athletes in the clock provides a player with its own set of sound recordings and the ability to determine the weather forecast in the selected area.

Every day there are new devices designed to greatly simplify our lives. These gadgets include finow x5 air, These watches are able in some cases to completely replace the smartphone. A powerful processor, a large amount of built-in memory and operational memory provided this smart-clock the title of one of the most nimble in the market. A tempered glass, steel casing and leather strap allow you to operate the device in difficult conditions.