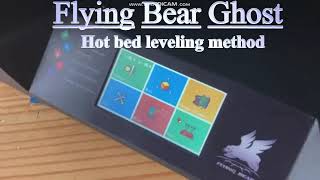 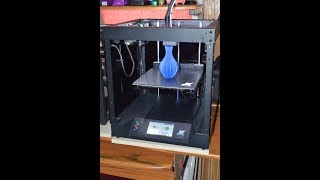 Good day to all. Finally I became the owner of the 3D printer “Flyingbear Ghost” which was delivered to me 26 days before the post office of my city (I immediately write as it is, so as not to torment, but how, and where and how much). The package was about kg heavy. 20, ate doper to the house (I advise you to negotiate the delivery to the door).

In this review, I will try to convey my first impressions of the “Flyingbear Ghost” as accurately as possible, and also make a small comparison with the predecessor “Flyingbear P905” (on which I print about half a year). Why I chose the manufacturer Flyingbear – because the 3D printers that they produce me the most like mechanics (which for me was completely understandable and on bearings), low price, as well as the possibility in fact from the designer (this is about the “Flyingbear P905”) to collect quite a good printer, which in turn gave me a very great experience in its use. I also want to note the responsiveness of the seller – who in turn helped me in every way when assembling the printer, answering all questions of interest to me.

Well, now about the main thing, but I’ll start about positive impressions:

1. The Flyingbear Ghost printer itself is a modernized version of the “Flyingbear P905” – where all the mechanics have survived, as well as the MKS GEN v 1.0 motherboard, the engine (the rest has all changed);

2. The best solution was to place all the electronics in the closed bottom of the printer, which is a huge plus. Now with all this electronics do not need to wax, solder and tie the wires (breaking the head as normal to lay the wires), sit studying the circuit, how to connect everything. Everything is now done neatly and beautifully, everywhere connectors are added. The only thing left is to connect all the engines, the table and the head of the extruder – where all the wires are labeled (it’s very simple, compared to the P905 it took about an hour to sit all the wires and more than 2 hours to study it all). Added a wifi module and a filament termination sensor (in the future there are plans for wifi). Large, bright and beautiful screen (I really liked it).

3. The frame is almost completely changed in comparison with P905, the upper part is solid (already completely assembled (the shortcomings were removed in P905), as well as the lower part is made entirely of metal, only the bottom is plastic, all screws are well tightened, side racks, and table guides (essentially 5% of the assembly of P905)

4. In the head of the extruder (which is also completely made of metal), the parts are carefully hidden (to the cochlear article type, it’s a pity not to take pictures when disassembled);

5. The table is now on large adjustable bearings, its stability greatly pleased me (let’s see how it will be further), the insulation of heat loss increased (the layer became thicker by about 3 times), a special coated glass was adhered to the top for better adhesion of plastic, PLA to it sticks very well without any dancing with glue, scotch tape, etc .;

6. Well, the side walls on the frame of the printer, which will save from drafts (otherwise I have already worn out with air conditioning, printing on P905), which is not an unimportant factor.

Now about what I did not like very much:

1 Now you can position the plastic feed motor from the back of the printer, which in turn complicates the replacement of the plastic (the P905 could be placed on either side of the printer);
2 It is not convenient to climb to screw the bolt to the Z-axis limit of the desktop (for a long time it was aimed with an anchor key, but in principle it was twisted and forgotten once);
3 A fashionable screen with raw firmware, to which there is no normal software, now standard marlin with the necessary changes you do not fill (as I played with

P905 changed it to 2 extruders, replaced the driver on TMC 2208), but the manufacturer promised that it will be soon a big upgrade, where everything I asked for will be changed (I want to install the TMC 2208 driver).
The manufacturer of Flyingbear has invested a lot of effort in 3D printer Ghost – now it’s beautiful and presentable it looks like a good printer, of course it was not without a hitch, but if you put a little more effort and add a driver TMC2208, beautiful illumination of the print area, self-shutdown module, doors with a cover then there will be a decent 3D printer that is not inferior to the more expensive brands. I personally liked this printer and can not pay attention to trifles any more.

If anything I forgot to mention, do not get angry with me, but ask me in the comments, I’ll be glad to answer. All the best to you and good luck in achieving your goals.

In the video I tried to show all the interesting things as much as possible, except for the detailed assembly, which is very well displayed on the Flyingbear channel in Ytube. The printing of the cube was the first on the printer, not on the show-off, but to understand that where you need to adjust in the slicer, but the vase is already the result of how it can be printed on it (though not yet raped violently, printed at night, printing speed of 60 mm / s PLA rod firm Greg) ……