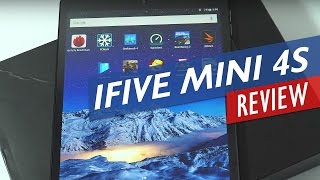 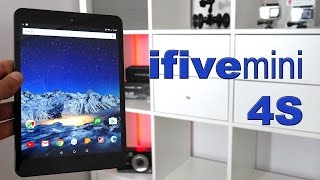 The Chinese brand FNF brings us today a very interesting low cost tablet in the range of 7.9 inches. We refer to the IFF Ifive Mini 4S model.

In terms of design, highlight its 340 grams of weight and its narrow vertical frames. This Chinese Tablet PC looks quite thin, about 6 mm thick. It is also well assembled and presents a premium aspect much higher than other devices, which like this, fall within the range of entry.

The aluminum backlight looks very elegant and has the advantage that fingerprints do not stick to it easily. A particularity of this FFN Ifive Mini 4S tablet is that the main camera is placed in a corner.

As for the 7.9-inch screen , it has a retina panel, with a high resolution of 2048 x 1536, courtesy of Sharp. The truth is that it looks pretty good at any angle. Both what is the definition and the reproduction of colors. Without a doubt, the best of this Chinese Tablet PC .

One aspect that strikes us is that at the hardware level it includes a Soch from Rockchip. Specifically, it is the RK3288, a quad core that runs at a speed of 1.8 GHz and incorporates CortexA17 technology.

If we talk about the graphic section, the IFF Ifive Mini 4S is accompanied by a Mali T764 GPU. The processor is not exactly the most modern, but in practice it works with ease, providing a very efficient performance. Nor behaves badly when playing with 3D games, despite the high resolution of the screen.

What is surprising is that in a tablet with a SoC of this type, the Android 6.0 version is included as an operating system. The terminal comes from the factory with 2GB of RAM and 32GB for storage , which can be extended by microSD cards up to 128 GB.

The behavior of the FIVF Ifive Mini 4S camera is acceptable. Although logically, the 8 megapixel sensor can not compete with much more advanced models, the photos we take outdoors are at least decent. The 2-megapixel front webcam meets for video conferencing, without more.

The battery of polymer of lithium of 4.800 mAh, provides a autonomy of 4 hours of reproduction of video, a number that can leave us relatively calm. Finally, we end with connectivity. Here we find a micro USB port for data and charging, a 3.5mm audio jack, microSD card reader, dual band WiFi and Bluetooth 4.1.