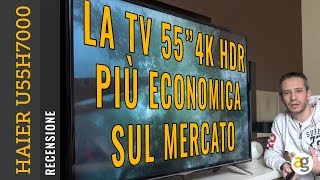 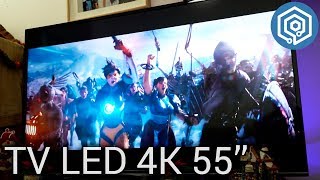 The new biggest test device we have ever had the pleasure of welcoming to the editorial office is the Haier U55H7000 – a fat 55″ inch TV with 4K resolution, HDR and Smart TV features! And it should only cost as much as a TV with only Full HD resolution. Is it worth looking at China when the next television purchase is imminent? We recently tested the Xiaomi Mi TV 4A with 43 inches: In China such a TV may destroy the competition – but that is also due to the user interface and the streaming offer, which is geared to the Chinese market.

First of all: the huge package has arrived safely! The Haier U55H7000 is shipped without outer packaging, but only a few scratches and dirt is carried by the carton from the transport. The TV is securely packed in the box: Styrofoam protects the housing from all sides – I would have only wanted a styrofoam plate in front of the panel, so that it is also completely protected.

The scope of delivery includes a few notes providing information on energy requirements and the guarantee. Also included is the remote control, 2 AAA batteries and a manual (German). Also included in the delivery are the two feet for installation, screws, the power cable with German power plug and a 3.5mm jack to 3 composite adapter, for older consoles for example.

You still need to attach the two feet to the TV, for which you need a Phillips screwdriver and better be in pairs. The Haier 55″ 4K TV is a flyweight with 14kg, but the dimensions (124,8 x 78,5 x 9,7cm) are quite bulky and the goods accordingly expensive. The base is 25cm deep and both are 103.5 cm apart. If you now expect to need an adapter or a translator for the TV of the Chinese brand, I can reassure you: I only had to shorten the antenna cable of the satellite dish to fit the screw cap – otherwise everything went like clockwork! Staked out the old Samsung LED TV and moved the Haier to its place. All the necessary connections are there that the home cinema requires. The 5.1 system could be connected via digital SPDIF / Toslink output and an HDMI port.

At the first start, you select the country and language with the remote control and it is best to establish WLAN access (alternatively via LAN). Then the station search is already underway. Here it depends on what is given. The Haier 4K TV is equipped with a triple tuner: DVB T2 – terrestrial local television, S2 – satellite, C – cable. A CI slot (Common Interface) has also found its place and nothing stands in the way of PayTV. I would say the most common is satellite, Astra 19.2 and without encrypted channels (Pay TV). The channel search runs quickly and unproblematically and then you can find the channel list in the usual order. The menu, Smart TV features or the hardware is completely compatible and you don’t have to expect any restrictions – great! The Xiaomi TV unfortunately looked completely different. The fast setup also gave a hint of the high working speed of the Haier U55H7000.

The Haier 4K TV with 55″ screen diagonal shows the typical TV picture: a simple black housing, a piano lacquer front with a silver decorative strip and feet. The frame is 15mm wide. This is completely made of plastic; only in high-priced devices metal can be found on the housing. Moreover, the housing is quite thick – no comparison to modern OLED TVs. This is also evident in the feet: they do not create a particularly stable impression and the large TV swings when touched. But when the TV stands, it looks good: it looks stylish, is simple enough and in this size a monument in the living room. The rather cheap materials and the somewhat unstable impression are irrelevant as soon as he stands on the TV bench.

The remote control, on the other hand, cannot simply be accepted. It is made of cheap plastic and the keys clatter. These can also be easily replaced by a universal remote control. The functions of the keys are clearly visible and the layout is also well thought-out. Cool on the remote control of the Haier TV is the “Netflix” button, with which you can wake up the TV from standby and start your series directly. The same applies to the “YouTube” button.

As I said before: for the home cinema experience my TV is also connected to a receiver (Pioneer) including 5.1. This works first class! The receiver is connected via a Toslink cable for TV programs. In the sound settings you will find the necessary options. If the Haier U55H7000 is switched on, the receiver is also switched on. The volume is also synchronized and can be controlled with both remote controls. But we are more interested in the speaker of the Haier 4K TV: the power is indicated with 2×10 Watt. In general, every integrated TV speaker is “modest”, which also explains the boom in sound bars. In the serial state I don’t like the speakers very much, they sound very flat and hollow. In the settings you should activate the “Dynamic Bass” and lower the low tones a bit and raise the treble of the equalizer. The sound is fine and you can use the Haier 55 inch TV without external speakers. You can follow conversations well and the mids are also comfortably dosed – you don’t really get real bass, but it’s enough not to distort the familiar sounds and tones. An alternative is the headphone output: if you have an old but powerful PC speaker set or a strong Bluetooth box, like the Xiaomi Network Speaker, you can use it. More than a 3.5mm jack cable is not necessary to spice up the sound.

Basically, the Haier U55H7000 is a great and huge 4K UHD TV, which is even a bit cheaper than the competition in this country. The exterior is not quite on top level, but after installation you don’t notice it anymore. The localization is great: not a single connection is missing, two well usable apps are there and also the triple tuner does its job. The integrated speakers really don’t create a cinematic feeling, the remote control seems very cheap and unfortunately there is a little lack of contrast in “bad” footage. The Haier TV with 4K material also offers HDR – High Dynamic Range Support. In terms of performance, the Haier U55H7000 is still a super device that can outperform competitors in some categories (speed). The 55 inch TV is shipped from Europe (G-W-25, Spain?) and is normally available at a price of 500€, last on offer for 470€. Here you can already save a certain amount if you can do without the brand name. I would like to name one competitor after all: Xiaomi Laser Beamer – another category, but wow!