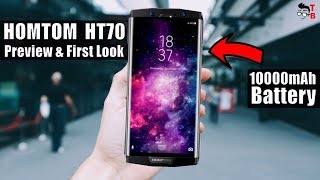 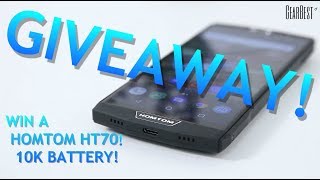 HOMTOM is the typical brand that probably won’t catch your eye. And you’re also likely to change your mind the moment you start looking for mobiles with a big battery. HOMTOM is a manufacturer that belongs to the DOOGEE group – this certainly sounds more like it – and is specialized in precisely that, in bringing smartphones with high energy capacity to the market. Today we are talking about its latest proposal, the HOMTOM HT70.

In today’s review we focus on the HOMTOM HT70, a terminal with a very powerful 10,000mAh battery and a design that prides itself on being the slimmest of long range smartphones.

If you look at the HT70’s features, you’ll see the typical Chinese mid-range of 2018: a decent CPU, good RAM and plenty of storage space, but woe! That battery, my mother, whoever caught it….

Visually, the HOMTOM HT70 looks quite different from the usual stereotypical designs. It’s more like a roaring phone than anything else, with well-defined frames and casing and sharp edges. It’s not as stylish as other smartphones with their smooth, curved edges, but it’s a sign of personality and power. Something that reminds me of Transformers’ films, like, “I don’t know what it’s all about, I’m a little confused, but I guess I like what I see. A little fresh air that never hurts for a change.

The HT70 features a large 6-inch display with an 18:9 aspect ratio and 1440x720p HD+ resolution. It is not a screen that stands out too much, but at least it chooses to lengthen the screen, something that practically all the brands have pointed to this season.

If we go into the guts of the HT70 we discover the classic hardware that has become so fashionable in recent months within the Chinese mid-range:

The MTK6750T processor from Mediatek has become fashionable, yes, but precisely because it works really well. It offers a low consumption and its performance is very good on a daily basis. It’s not a combo for playing powerful games, but for everything else it’s more than satisfactory – I’ll never get tired of talking about how well my Elephone P8 Mini, which you wear the same SoC as this HT70, performs. It also incorporates Bluetooth 4.0 and unlocking via fingerprint detector.

In the photographic section there are surprises. Contrary to what it might seem, the HOMTOM HT70 is equipped with a triple camera: a double camera on the back with a bokeh effect, and a lens for the selfies area. The rear offers 13MP+2MP resolution (up to 16MP+5MP software) and the front 8MP with f/2.2 extends to 13MP with software extension.

As for the strength of the new HOMTOM star terminal, what can we say? Mounts a huge 10,000mAh battery with USB type C charging and quick charge function. A battery that offers us an autonomy capable of lasting several days, or a good number of hours in case we make a really intensive use of the terminal.