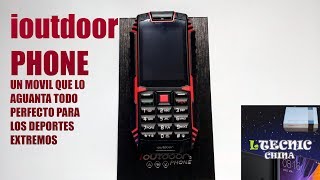 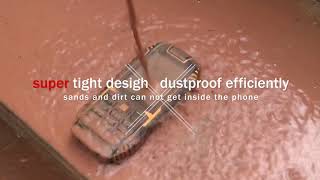 Unfortunately, the button phone Nokia 3310 of the sample of 2017 all very disappointed, because it was not so strong as its predecessor, released in the distant 2000. One Chinese company saw this as a chance to create a unique one-of-a-kind button phone that can not be destroyed. So it turned out ioutdoor T1, which has just been announced. This mobile device has got such a solid body that you can play football safely or swim with it in the pool without fear of damaging it.

The ioutdoor T1 keypad, announced today, has water and dust protection according to the IP68 standard, so that it can be immersed underwater to a depth of 1.5 meters to 30 minutes. Due to this feature, it will be an excellent purchase for all fans to swim in the pool, because even if it accidentally falls into the water, then absolutely nothing will happen to him.

In addition, the phone ioutdoor T1 is protected from bumps, so you can safely throw it from a height of up to 2 meters and be sure that nothing will happen to it. The manufacturer notes that the novelty has a reinforced antenna that allows it to catch a network where even the best smartphones from Samsung and Apple can not catch it. Unfortunately, this device is only compatible with second-generation 2G networks, that is, it will not work in 3G and 4G LTE.

The novelty can boast a 2.4-inch color screen, 128 MB of operational and 32 MB of internal flash memory, a basic 2 megapixel camera, a slot for installing two SIM cards and TF memory cards, a 2100 mAh battery, and FM- radio, Bluetooth 3.0. It is claimed that it has a single battery charge, it works up to 40 days in battery mode.