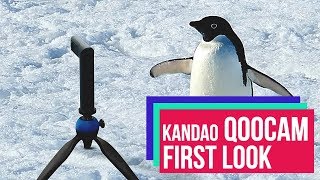 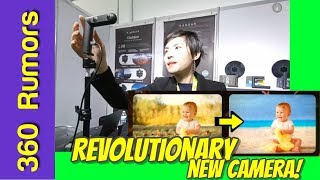 For the first time about the release of a new camera, Kandao company announced back in December 2018, a project was announced, described as “Stereo & 360-Camera”. Then the developer representatives did not report any details about the novelty, promising only to bring it to CES 2018. The promise was kept and within the framework of the annual exhibition Kandao officially introduced its new camera Kandao QooCam, while it became clear that the novelty can shoot not only the usual 360-degree video, but also supports the 3D format.

QooCam has three lenses and it can be used in two shooting modes due to a unique transforming shape. In an upright position, the gadget uses two multidirectional fish-eye lenses for shooting classic 360-degree rollers. When you rotate the upper part of the case to the horizontal position, the camera switches to 3D shooting with hemispheric image capture, which is extremely convenient for fast shooting of clips for the Google VR180 service.

The main feature of the camera is the support of the technology of forming a depth map for the 3D-shooting mode. The technology was developed by Kandao Obsidian and allows you to easily replace the background on the footage or to perform perfocus after the shooting. This functionality can be useful not only for professionals in the field of 3D content, but also for ordinary fans who, for example, will use the live-broadcast option in 3D and want to change the background in real-time mode on Twitch or YouTube time, as it is possible to do special streaming web cameras such as Logitech C922X or Razer Stargazer.

Summarizing, we can say that Kandao QooCam impresses with its innovative design and, most importantly, the convenience of management against the background of the proposed functionality. Fast switching between shooting modes will be to the liking of beginners, but more experienced users will surely appreciate the function of forming a depth map.