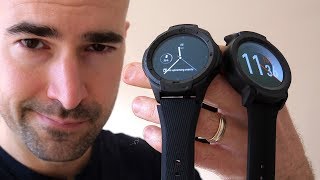 At the beginning of 2019 the manufacturer Mobvoi released the TicWatch S2. It is the successor of the first generation, which appeared at the end of 2017. The Smartwatch uses Google’s Wear OS operating system. Visually, the intelligent watch has matured in comparison to its successor. It also proves to be extensively equipped by enabling pulse measurement at the wrist and recording outdoor activities with GPS and GLONASS. The letter S in the product designation stands for sport and thus indicates the fitness-suitable design. At the same time, the Smartwatch is also recommended as a robust companion for outdoor disciplines. After all, it is not only waterproof, but also certified according to military standards. As an additional special feature, it comes with a special monitoring mode, which is intended for swimming training.

Compared to the first generation, the TicWatch S2 has matured visibly as the successor, as has the TicWatch E2. This impression results from the colour design alone. While the predecessors were each available in three versions, which also included a striking yellow signal tone, this has now changed. Both Smartwatches are offered by Mobvoi in black. Additionally the S2 appears in a white version.

What remains, however, is the respective basic tenor. Like the first generation, the S2 has a sporty look. The abbreviation S stands for “Sport” – the E for “Express”. The casual appearance of the TicWatch S2 generates Mobvoi with a tachymeter scale. In addition, it is certified according to US military standards and can therefore be a robust companion for outdoor enthusiasts and extreme athletes. Due to the neutral colouring in black and white, it can be called a unisex wearable, which should therefore appeal to both men and women.

The TicWatch S2 is the slightly smaller model with 46.6 x 51.8 x 12.9 millimetres compared to the TicWatch E2. However, these deviations are marginal and hardly noticeable in a direct comparison. Meanwhile, there are no differences whatsoever in the display: the AMOLED touchscreen has a resolution of 400 x 400 pixels. Manufacturer’s own watchfaces as well as the dials available through Wear OS allow you to adjust the background according to your own wishes.

Mobvoi Smartwatches can also be given an individual touch by the interchangeable wristbands. These have a width of 22 millimetres and can be replaced by any other with matching dimensions. The bracelets are made of silicone and the case of polycarbonate. This allows the manufacturer to guarantee a water resistance of up to 5 ATM, so that the wearer can also go swimming or surfing with the companion on his wrist.

Sports enthusiasts get their money’s worth with the TicWatch S2 as well as with the TicWatch E2. Accordingly, they make it very easy for outdoor enthusiasts to record the distances they have covered. With GPS and GLONASS as well as the additionally supported Chinese satellite service Beidou it is easy to record the routes. Users therefore do not necessarily have to take their smartphone with them for training.

A special feature is the monitoring mode, which is specially designed for swimming. In concrete terms, this means that the Smartwatches keep an eye on the current fitness level of their users even under water. Since the models are protected up to 5 ATM, they can withstand pressures up to 50 meters deep.

To record sporting activities, we recommend the Google Fit App, which is pre-installed on Wear OS. On the other hand Mobvoi also offers applications with TicPuls, TicGesundheit and TicÜbung which are dedicated to fitness and health. For those who aren’t satisfied with this, a visit to the Play Store is a great way to download more apps to your watch.

Self-explanatory, there is always the possibility to download all kinds of applications and thus adapt the Ticwatch S2 to your own ideas for use. With a timer, a stopwatch, the weather forecast or even a translator, Wear OS already comes with some everyday helpers.

The TicWatch S2 acts as an extended arm when connected to the smartphone. Finally, it draws attention to incoming calls, SMS, e-mails, messages from social networks and messenger services. The content can be answered directly by entering it on the display.

The battery life of the Smartwatch is one to two days, depending on the intensity of use. Then it is recharged. However, settings such as screen brightness, the regularity of heart rate measurement or the question of whether the GPS module is active have a decisive influence here.