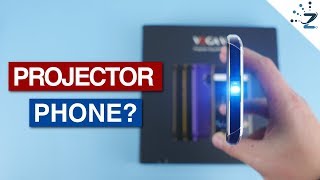 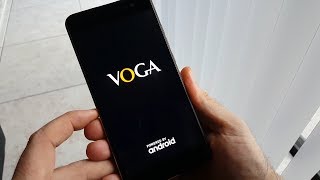 The smartphone market is highly competitive, at least in the Chinese market, for example, Xiaomi is hard to overlook. That’s why smartphone manufacturers always come up with something new. VOGA is a so far unknown manufacturer, which presents an unusual, if not brand new, feature in this price range. The VOGA V smartphone has an integrated beamer!

The fact that you equip the VOGA V with a projector is not even immediately noticeable. At first glance, one suspects an ordinary middle class model. The upper and lower edges of the screen are even thicker, the manufacturer does not take up the “borderless” trend. The margins, on the other hand, are quite thin. Despite the thicker bezels, the V works with on-screen keys and not with touch-sensitive keys. The main focus of the front is of course on the 5.5 inch display, which has Full HD resolution, i.e. 1920 x 1080 pixels. This is an IPS panel and the pixel density is 400 ppi.

The power button and volume keys are located on the right-hand side of the housing, the micro-USB connector and the 3.5 mm jack connector are located at the bottom. The back reveals the fingerprint sensor as well as a metal element on which the main camera including flash is located. The model name “V” and the reference to the laser projector were also engraved on the metal element. On top it gets exciting! Here we find the actual “beamer”, i.e. the beamer lens or beamer lamp – more about this later.

Since the smartphone is probably not mainly used as a beamer, but as a smartphone, the hardware is crucial. To anticipate, this is a typical mid-range China smartphone. The MediaTek MT6750V processor is used, which can also be found in the Blackview S8. A cluster of four cores with a clock frequency of 1.5 GHz and a quad-core cluster with a clock frequency of 1 GHz are not at flagship level. But it is definitely enough for everyday applications and average games. With 3 GB RAM and 32 GB internal memory you are a bit below the level of a Leagoo T5, which we have already tested.

Of course, a camera is a must on a smartphone. Even if this is not the focus (pun intended), the 13 megapixel sensor should be sufficient for snapshots. For selfies you have an 8 megapixel camera at your disposal. Let’s be honest, we don’t expect more than average food here. After all, the camera is almost always one of the weaknesses of Chinese smartphones, even with established manufacturers. To power the smartphone and the projector, the VOGA V uses a 4,000 mAh battery. That doesn’t seem like much, considering the projector.

The integrated beamer is a MEMS laser projector. MEMS stands for Microelectromechanical systems. A so-called microscanner has the advantages that the form factor, i.e. size and weight, are very small. The manufacturer promises a resolution of 720p, i.e. 1280 x 720p. This is of course not a full HD resolution, but the UTEN S1 Mini Beamer tested by us does not create any more. VOGA recommends a maximum distance of 1.8 m, resulting in a diagonal of 70 inches.

VOGA also promises that the image automatically adapts to the wall, so you don’t have to manually adjust it meticulously. As runtime VOGA gives an optimistic 4 hours. Then, however, we assume, no percent battery for normal smartphone use will be required. This does not replace a home cinema and certainly does not play in the league of the Xiaomi Mi Ultra short distance projector! The focus here is clearly on portability. Spontaneously the latest China gadgets video review with multiple views? Watching photos together without having to give the phone around? No problem! The beamer should actually be activated with only one or two clicks.

Although the projector is certainly the main focus of the VOGA V, the connection and connection options have not been overlooked. Surprisingly, even LTE Volume 20 is on board. In addition, there is 802.11b/g/n WiFi, unfortunately no ac-WLAN. The V is equipped with Bluetooth 4.1, GPS and A-GPS are also available. On the bottom side there is a micro-USB slot, as well as a 3.5 mm jack connector, which is especially useful for the beamer to provide an external sound source. There is no dual SIM slot, this is a hybrid SIM slot.

If the VOGA V were a smartphone without a projector, it would be no more than a very average mid-range smartphone. Good for everyday use, but without specialising in gambling, photography or battery life. The projector, however, is a great feature, which is of course not completely new. Motorola already has the possibility to connect a modular beamer to the Moto Z. With the VOGA V, however, this is firmly integrated. In addition, the price of the Motorola smartphone, including the projector, is almost 50%. Since we do not yet know the manufacturer, we cannot give a reliable estimate. So all we have left to do is test it, or what do you say?