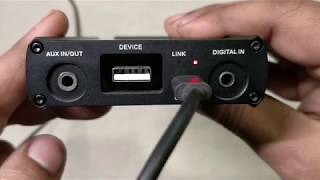 xDuoo continues to delight fans of quality sound who are experiencing financial difficulties. After a couple of X20 and X3II players, as well as a variety of amplifiers, the company decided to continue the line of devices with an incredible value for money. Thus, a portable DAC amplifier XD-05 was born.

xDuoo decided that if you make a portable DAC/amplifier, you’re already at full speed. First of all, we decided to equip it with maximum inputs: optics, coaxial, USB with mobile device support and even line input. Of course, I would like to have a wireless interface for the sake of completeness of sensations, but to demand it would be impudence taking into account the price. The next step was convenient operation: there is a small screen for information indication, switches, analog volume control. One of the most popular AK4490 DACs and a powerful amplifier with BUF634 as a current buffer were added to it. In the role of USB-controller delivered a modern XMOS, which gave support not only for the signal with a resolution of up to 384 kHz and 32 bits, but also DSD up to DSD256. And in order to make the customer feel better, you can buy xDuoo XD-05 for only 14 500 rubles. That case when it would be desirable to tell already after acquaintance to the device that it has managed, but I will hold back and I will tell in details.

Here everything is traditional enough for xDuoo, the outer box is made of glossy white paper, inside it there is an inner box made of black dense cardboard. It has a player on top of it, and under it everything that is included in the delivery set. In addition to the device itself, you will get 2 USB cables (one for charging, the second for connecting to a PC), 5 pairs of self-adhesive legs, a pair of rubber bands for attaching to the signal source, mini-CD with drivers and different papers.

The company has done a good job of looking good. XD-05 received a black aluminum body with silver inlays. There’s also a black version, but it doesn’t look that interesting to me. The shape of the case is very well thought out, because the main scenario of using this device is a portable connection to the source, XD-05 is made as long as possible and, thanks to the moderately small width and thickness, allows you to build “sandwiches”, which can even be considered as portable. Although I still don’t really understand the connoisseurs of two devices, the solution turns out to be too large. The case is made very reliably, level of execution and assemblage too does not cause complaints.

There are a lot of controls, so they’re scattered at different ends. At the back are the main interfaces: combined coaxial/optical input, MicroUSB connector for charging, line input, which also acts as an output, and USB connector. The funny thing is that the latter isn’t made in the form of a socket, but in the form of a plug located in the recess, apparently, for ease of use with mobile devices. For example, Apple CCK has just such a connector, and under Android made a lot of adapters “for flash drives”. Of course, instead of the usual USB cable here you should use a USB-xtender with a socket at one end. By the way, the complete wire, by the way, I have periodically caused the loss of connection, so that it may have to be replaced by something better. On the same side there are two LEDs, one showing charging, the other one showing the connection of a digital signal source.

The front panel is used for information and control. On the left is a 6.3mm headphone jack, on the right is a volume control combined with a power switch. The main place in the center is occupied by the OLED-screen, it is placed at a small angle, so it is convenient to look at it, even when the device is lying on the table. The screen displays the selected input, information about the signal and active filter, as well as the battery status. Three switches are located below the screen. The first, three-position, is used to select the input (USB, coaxial/optical and line input), the second activates the bass gain, the third, as well as the three-position, is used to select the gain.

Some of the buttons did not fit on the front side, so they were placed on the side. These buttons are responsible for: switching the display off and on, controlling the built-in Absempler and selecting one of the digital filters. The upside down button allows you to select one of the values: off, 48 kHz, 192 kHz and 196 kHz. In addition, you can select from 4 digital filter modes for PCM and 3 for DSD. In general, switching on the receiver does affect the sound, and the RF becomes clearer, but sounds more emasculated. Also, traditionally, the influence of different filters is very little, so much so that it borders on self-influence.

Despite the presence of a fairly powerful battery, the device with these characteristics can not have a record autonomy. In my USB DAC tests, the XD-05 worked for 10 hours and 35 minutes, with a full charge time of 5 hours and 10 minutes from the 2A charge for the iPad. By the way, a separate charging port makes the device a little inconvenient in stationary use, as in this case you will have to have a separate power supply to charge the battery.

The midrange frequencies are neatly accentuated. There is a certain accent on the HFO that allows to achieve the effect of “output” of the vocals on the foreground relative to other instruments, and it is beneficial to the construction of an imaginary scene, especially in the depths. Otherwise, microwave frequencies are traditional for modern devices: detail, speed, emotions – all this is here. Feeding is rather smoothed, XD-05 does not try to depict monitorability. The imaginary scene is medium in width, but the instruments have good volume and are perfectly separated.

Upper frequencies – perhaps, that moment which most gives out budgetary essence of the device. They lack gloss and refinement, they are a little simplified, they lack resolution and ease of attenuation. I suspect that this is done specifically to create not tiresome sound, but in good headphones (especially top multi-driver fittings) this simplification is well heard. Though it is necessary to consider that we speak about the device at the price hardly more than 200 dollars, therefore to demand from it the same that from 500-dollar – it is unreasonable. Despite the coarseness, high frequencies do not cause rejection, they do not have a quantitative excess, and they are not inclined to cut the ears.

In general, xDuoo XD-05 turned out to be a folk device. Delicious, slightly tinted sound, a lot of interfaces and features, good build quality and a very humane price raise the ratio of cost to quality to unattainable height.