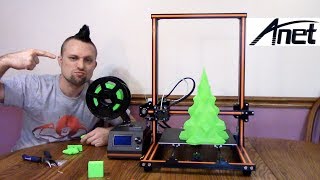 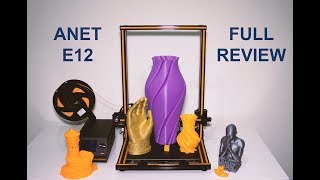 When you start looking to buy a 3D printer there are a variety of options to choose from. Although many manufacturers have already assembled models in their catalogue, we can also opt for a printer kit for self-assembly, such as the Anet E12.

This is the natural evolution of the previous version, the Anet E10, which we have already told you about. It is aimed at users with a budget that is not so tight, who want a good quality 3D printer that is compatible with a large amount of materials.

The Anet E12 is a DIY printer kit, which you can easily mount at home. Its modular design enhances the previous 3D printing devices of this Asian company. One of the details we like the most is that the power supply, the controller and the rest of the electronic components go separately in a console attached to the printer.

On the other hand, the frame is made of an aluminium alloy, which gives it greater strength and stability. Its open structure allows you, for example, to adjust the belt tension to avoid jumping problems. This 3D printer measures 420 x 520 x 510 mm and weighs up to 5.8 kilos.

It is appreciated that an LCD screen is included in the box that comes with the equipment. This will make it much easier to use, as we will be able to modify the temperature of the print base and the head, as well as control the fan speed. You can also choose the positioning function to move any of the axes slightly, making it easier to calibrate them.

Precisely on the side of this kind of control center, we find an SD slot, from which we can directly print all the 3D models we have stored on a memory card. No need to connect it to a computer. Please note that the supported file formats are G-code, Gco, JPG, OBJ and STL.

The Anet E12’s unique nozzle extruder has a diameter of 0.4 mm, supporting soft filaments and feeding in different directions. The Anet 3D printer also boasts a generous 300 x 300 x 400 mm printing area. Which will give us the ability to print large objects. The thickness of the layers moves in the range of 0.1 to 0.4 mm. This makes it possible to print larger and more detailed objects.

Thanks to a power of 250W, we will be able to print at a speed of 40 to 120 mm/s, using all types of filaments, such as ABS, PLA, HIPS, TPU, PVA and PP, to name but a few. It should be noted that the temperature at which the shutter works is 260° C, while the maximum temperature allowed by the platform is 100°C.

The mechanical precision of the axes is quite satisfactory. The XY axis is 0.012mm, while the Z axis is 0.004mm. It should also be noted that the Anet E12 is compatible with Windows and Mac OS operating systems, as well as different 3D printing programs such as Cura.