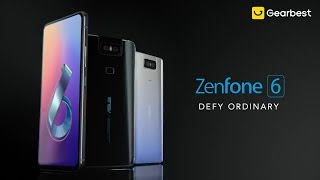 ASUS Zenfone 6 will be a groundbreaking flagship?

The official premiere of ASUS Zenfone 6 is over. The smartphone offers top specification, original camera mechanism and a great battery with a capacity of up to 5000 mAh. How much does it cost and is it worth buying? ASUS Zenfone 6 made its official debut. It’s a flagship that brings a 5000 mAh battery with it – more than its competitors, and that’s not the end of its advantages. Is it worth buying it for very good money?

After several months of stagnation and a wide note on the front, the producers finally decided to change their style. Holes in the screen are only a momentary half-centre, and the cameras pulled out in various ways begin to dominate – at least until they can be integrated with the display. ASUS Zenfone 6 is another representative of this trend, but there’s no way to win the beauty contest.

Let’s start from the front, because it looks great here. The frames around the screen have been greatly reduced, and the bottom bar is also much narrower than the previous one. Thanks to this, even people with smaller hands will not have problems with handling with only one hand. The 6.4-inch screen seems large, but the lack of any indentation will provide good ergonomics. The screen-to-body ratio in this case is 92 percent – a great result. Colors should be perfect, ASUS boasts full DCI-P3 coverage.

Unfortunately, at the back is much worse, there are also some deficiencies, which probably were dictated by the price. The most eye-catching element is, of course, the rotating camera – the whole process is automated. You may disagree with me, but in my opinion it looks really bad – although I must admit that this makes the ASUS Zenfone 6 one of the best (if not the best) self-powered smartphones on the market. I mentioned the shortcomings – for example, the fingerprint reader on the back panel, not integrated with the screen.

It is nice, however, that there is an added value. ASUS has decided to meet the expectations of users and hasn’t deprived Zenfone 6 of its headphone connector, or even added an infrared port, so you can use it as a remote control. There will also be a microSD memory card slot. Notification LED? Also on board. Stereo speakers will take care of the experience while watching movies. There is also a dedicated button on the casing, which natively calls the Google assistant.

Snapdragon 855 is the heart of the device, with no surprise. No one should complain about the lack of power or fluidity in any scenario of use – especially since ASUS has decided to give in to the digital race with paper specifications and will also equip its flagship with 6 or 8GB of RAM. I have no doubt that everyone, including the gamers, will be happy with the working culture – although I can’t help noticing that the lack of a 12GB version is a slight disappointment.

The data memory (UFS 2.1) is also not as fast as OnePlus 7 Pro. However, ASUS has paid a lot of attention to the new front end. He says optimization is the best on the market, with shorter opening times for basic functions such as keyboards and calls than competitors. There was also a dark mode. In many respects, however, it is pure Android, which is to be updated also to the R version, which will debut in 2020.

You’ll find the same performance on much cheaper models, but ASUS will buy a lot of users with batteries. In 2019, most manufacturers increased the capacity of their flagship cells, but the Taiwanese went one step further. 5,000 mAh is a promise of two days of pretty intense use, and with the right software optimization, maybe even more. Such a battery needs to be charged quickly enough – in this case QC 4.o.o. Wireless charging is also available.

I don’t think the camera is supposed to be a big drawback of Zenfone 6, but at the same time it doesn’t start in the lead. It consists of two sensors: the already well known 48-megapixel Sony IMX586 (f/1.8) and 13-megapixel wide-angle lens (125 degrees). The latter will be especially useful – the rotatable mechanism will allow you to make a group selfie. ASUS praised him during the presentation, of course, claiming that a double camera is enough, but we’ll hold off on his evaluation until he gets to us for testing.