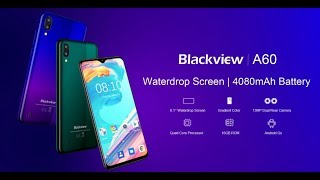 Blackview A60 is the latest smartphone of the brand, and at the same time one of the most beautiful among those working under the control of Android Go. And it is also supposed to cost a little more.

Android Go is a very special system, Google’s lightweight operating system for entry-level phones. In 2018, Chinese manufacturers have produced a lot of mobile phones of this kind, such as our website: Redmi GO, CUBOT J3, CUBOT J3 PRO, Blackview A20, Blackview A30 and so on.

There is no denying that low-budget smartphones enjoy interest primarily because of the price. Manufacturers, however, often forget that a cheap smartphone should also be modern, and therefore made in accordance with current trends. Such is the latest Blackview A60, which, according to the manufacturer, has a great price/performance ratio. Unfortunately, the price has not yet been disclosed, so it is difficult to verify.

It seems that the biggest advantage of Blackview A60 is the implemented battery, which capacity of the components used should translate into brilliant working time on a single charge. It has a capacity of 4080 mAh, and still supports fast charging, although there is no information about the power.

The MediaTek MT6580A is responsible for the operation, so the SoC chip equipped with a 4-core ARM Cortex-A7 processor with a clock frequency of 1.3 GHz, as well as Mali-400 graphic chip and support for data transmission only in 3G standard. MediaTek MT6580A is supported by 1-gigabyte RAM. For the data has been reserved 16GB of built-in memory, which can be expanded through the use of a microSD reader.

The equipment will be equipped with a hybrid card slot, so it will depend on the user whether he wants to use the support for two SIM cards, or will give up one in favour of the ability to expand the memory through microSD cards.

The image is presented in HD+ resolution on a 6.088″ IPS display. It is worth bearing in mind that the screen has an unusual ratio of 19.2:9 and more in the upper part in the shape of a drop of water, in which there is a webcam for the Self, which allows to unlock the smartphone through a scan of the face.

On the back panel there is a set of two lenses, the main one with a resolution of 13MP, and is also responsible for blurring the background. According to the manufacturer, this set will be able to take pictures even in worse lighting conditions, thanks to optimization.

The smartphone after taking it out of the box is to work under the control of Android 8.1 Oreo in the Go edition version and therefore optimized for low-budget equipment.

Blackview A60 performs very favourably compared to the competition, although it has one disadvantage, which may prevent it from reaching a wider audience. There is no LTE modem on the equipment, and data transmission takes place only with the use of 3G network with a maximum speed up to 21Mbps. If it wasn’t for this one-glass, Blackview A60 would be one of the best, not the best Android Go smartphones on board.

At the moment, the price of Blackview A60 has not yet been revealed, but if it does not exceed $69, I feel that many will be able to forgive the manufacturer certain shortcomings resulting from the savings.