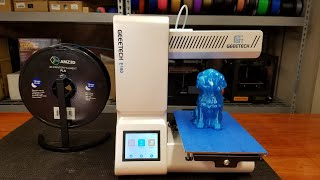 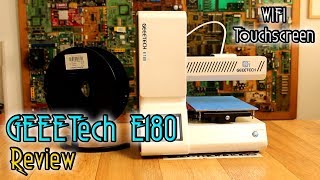 The Geeetech E180, a simple PLA 3D printing machine designed for the home, has some interesting features that should differentiate it from low-cost 3D desktop printers. Read on to see all the information we were able to collect from this small 3D printer.

Generally speaking, in the most economical price segment of the desktop 3D printer market, you have two options: Either buy a box of parts you need to assemble to get a working 3D printer – like the Anet A8s and TEVO Tarantulas – or use small plug-and-play machines like the Monoprice Mini and the XYZprinting da Vinci miniMaker.

Within this latest segment of low-cost 3D printers, the Geeetech E180 is a recent addition to the market. In a successful Kickstarter campaign in the fall of 2017, Geeetech raised $56,513 (target $50,000) to bring the E180 to the retail market.

Evolving one of the company’s first machines, the MeDucer, the Geeetech E180 takes the voluminous design of its ancestor’s box and reduces it to a casing popularized by Malyan and his 3D M200 printer (and Monoprice, which made it the Select Mini).

Naturally, in a new printer there is something original about it. Here, an elegant combination of black and white colours completes a look that, according to the company, makes it a “harmonious design” for the workplace and the home.

In terms of work, the printer has a simple design, with one printing end finished on a cantilever arm suspended on a printing platform that moves on the Y-axis.

At the time of writing, the Geeetech E180 costs approximately 298 Euros, depending on where you look. Considering the similarity of the models, this puts the Geeetech E180 a bit above the Malyan M200 or the Monoprice Select Mini.

The Geeetech E180 has a few aces up its sleeve that set it apart.

On the one hand, it features a removable quick-release nozzle system taken from your Giantarm D200 model. Much like the Ultimaker 3 system, with the push of a button, the nozzle assembly exits the print head for easy replacement.

These nozzle cores appear to have a ceramic coating, which the company says reduces heat loss and keeps the outside of the nozzle hot at about 100 degrees Celsius.

A colour touch screen transmits print information and (in addition to the application and EasyPrint 3D software) ensures precise fit control over the Geeetech E180. A 5-point platform leveling system is included.

Suitable for indoor and office environments, the Geeetech E180 only prints on PLA plastic.

Like other products financed through Kickstarter, it is inevitable that we find some criticism in our analysis (very rarely do these things work perfectly). And we did find something.

Sponsors of the platform holding the Geeetech E180 (as recently as mid-January) cite subextrusion as a problem. Some even go so far as to diagnose the problem themselves, citing as possible causes incorrect gears in the extruder and firmware errors.

In addition, other Geeetech E180 sponsors seem to have problems with the screws supplied to mount the printer’s filament coil holder which are not long enough.

Outside of the crowdfunding bubble, customer feedback on traditional online stores is positive. It may be that the Kickstarter sponsors (as is often the case) will receive the first production run of the Geeetech 3D E180 printer, with small imperfections that have not yet been removed. Possibly. Or maybe problems exist in a percentage of all Geetech E180 units. We can’t say for sure, so take it all with tweezers.