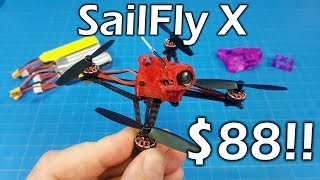 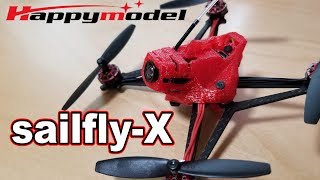 Sailfly-X is one of the “toothpick” type nano racers, toothpicks in French. This range was designed by pilot Bob Roogi, aka KababFPV. The principle? The tootpicks are based on an ultra-light and minimalist carbon structure, electronics borrowed from the Tinywhoop brushless and 6.5 cm long two-bladed propellers. You can recognize the propellers imagined by Parrot on his micro drones – they have since been copied by most Chinese propeller manufacturers. The toothpicks are powered by 1S or 2S batteries, sometimes 3S, rarely more. The Sailfly-X 105mm is one of them.

The carbon structure of the Sailfly-X is really minimalist: it is a 2 mm thick unibody part with motor arms made of two narrow bars. The motors are brushless models 1102 to 8500KV on which are fixed the 6.5 cm bipal propellers. There are no screws to hold them, they simply hold by being pushed on their axes. The motors are connected to the ESC 4 in 1 by twisted wires. This ESC of 5A Dshot600 and BLheli_S is part of a Happymodel Crazybee F4 component. It is based on an F4 processor, with an active OSD, flashed in Betaflight 4.0.0.

The central fairing, in 3D printing, partially hides the electronics. Through an opening at the back, the microUSB connector appears to make adjustments with Betaflight Configurator. It is easily accessible. At the front, we can guess the combo comprising the FPV 700TVL camera and a 5.8 GHz video transmitter with 40 channels and a power of 25 mW. Apertures allow access to the video transmitter button and allow the dipole antenna to exit. The camera angle is fixed by the fairing.

The radio receiver, in the version I tested, is FrSky D16 Non-EU compatible. Its antenna protrudes slightly to the left side of the unit. The battery is designed to be housed under the Sailfly-X 105mm, in a minimalist 3D printed trapdoor. The connector is an XT30 plug, with a capacitor. Happymodel supplies a 300 mAh LiHV (4.35V) 3S 3S battery in the box. Inside the box, there is an additional fairing and battery holder, Velcros for the battery, a screwdriver, a propeller puller, two screws and 12 propellers, or 3 complete sets. The weight of the device, without the battery, is 38.1 grams, for dimensions of 9.3 x 9.3 x 5cm (excluding propellers and antennas).

The pairing step with the remote control is disarmingly simple. No need to press a button while inserting the battery, it’s much easier and faster. Thanks to Betaflight version 4, you just have to type “bind” in the command line (CLI) of Betaflight Configurator, and launch the bind procedure on the remote control. The rest of the adjustments are classic, very fast for Betaflight regulars. The PIDs are fully factory set, there is nothing to do. Only the arming switches, of choice of modes, are to be configured.

The first flight is made on sight to take the measurement of the aircraft. Pushing the throttle makes it clear that the Sailfly-X is lively! Although it is clearly a nano racer for immersion flights, it is a visual flight game. The device passes well the small ones appear and clings well when nervous movements are imposed on it. Are these fished flights confirmed once the immersion glasses are worn?

All you have to do is push the throttle hard to gain altitude quickly: the Sailfly-X is fast, much faster than its tiny size would suggest. The camera angle is very wide, similar to that of Tinywhoop brushed. It’s a little surprising when you get into fast manoeuvres because the scenery is moving fast, a little too fast at first. But you get used to it quickly, and this wide angle allows you to understand the environment even when you are in a difficult situation. A good point? The device does not exhibit any parasitic vibration, even when the gases are pushed.