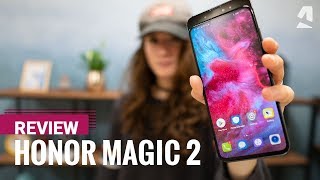 Honor Magic 2: a Full-Screen Smartphone With A Retractable Camera and Kirin 980

Honor has presented its new top smartphone Magic 2, which comes without a visible front camera and a display reaching to the edge. The camera is hidden in a slider mechanism with two auxiliary lenses, and three cameras are also used on the back.

With the Magic 2, Huawei’s subsidiary Honor has introduced a new Android smartphone in the luxury class segment that features a slider mechanism. The Chinese manufacturer showed the device for the first time at Ifa 2018, but did not provide any further information.

A 16-megapixel front camera with two supporting 2.0MP lenses is built into the slider of the Magic 2. Since this three-phalanx is not located on the front of the smartphone, the 6.39-inch OLED display with a resolution of 2,340 x 1,080 pixels extends to the upper edge – even without a notch. The Magic 2 has a slightly wider frame at the lower edge, but overall the frame around the screen is very narrow.

The supporting cameras of the front camera are used for depth of field acquisition and face unlocking. To be able to unlock the smartphone with a face scan, users have to slide the slider on – this is done manually. If you don’t feel like operating the sliding mechanism every time, you can also use the fingerprint sensor built into the display glass as a biometric unlock.

Inside the Magic 2, the Huawei Kirin 980 processor works with Dual-NPU (Neural Processing Unit). Accordingly, the smartphone can recognize scenes during the camera recording and adjust the image options. The main memory is 6 or 8 GB, depending on the configuration, and the built-in flash memory 128 or 256 GB.

The Magic 2 supports LTE on the frequency bands 3 and 8, which are important in Germany, but not 20. However, it is conceivable that Honor – if the smartphone comes to Germany – will also offer a version with band 20. If you buy the Magic 2 through an import dealer, you should expect not to have good LTE reception everywhere in Germany.

The Magic 2 comes with Android 9.0 and the Magic 2.0 user interface, which also includes a new language assistant. It is unclear whether it will be on board when the Magic 2 is launched in Germany. The battery has a nominal charge of 3,500 mAh and can be quickly charged via a 40 Watt power supply.