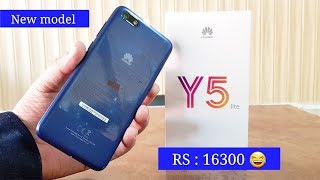 Huawei begins 2019 with a launch aimed at the affordable range, introducing the new Huawei Y5 Lite, its second mobile with Android Go, a light version of Google’s popular operating system designed to run smoothly on mobiles with few resources. It is of course a basic mobile with a very cheap price of around 100 euros, but that does not mean that it should be ignored, so dedicate this post to know it.

Aesthetically speaking it’s not bad for its price, but it doesn’t impress either. It’s a very popular design on Huawei’s affordable mobiles, but it features a 5.45-inch FullView LCD screen, which has an 18:9 aspect ratio and HD+ resolution of 1440×720 pixels.

The terminal has dimensions of 146.5 x 70.9 x 8.3 mm and a weight of only 142 grams. It is also worth mentioning that it is only available in two colour presentations: blue and black.

The fact that the Huawei Y5 Lite works with Android Go based on Oreo lets us intuit that it is not exactly very powerful, but that is not the terminal focus, as it is made to comply with the basics. In this sense, the terminal is powered by a Mediatek MT6739 chip with 1GB of RAM and 16GB of internal storage (expandable up to 256GB).

The device is powered by a battery with a capacity of 3020mAh and supports the most commonly used wireless connectivity standards: 4G LTE, Wi-Fi, Bluetooth 4.2, GPS, Glonass, Micro USB 2.0, among others.

In the photography department has a main camera 8MP with f/2.0 aperture and LED flash. The front sensor is 5MP and offers f/2.2 aperture, we won’t find luxurious functions like facial recognition or bokeh effect here, but at least it has LED flash.