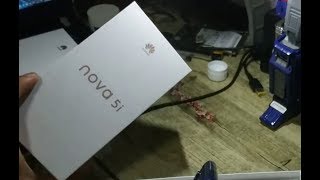 At an event in China today, Huawei presented three new Nova series devices. The standard version of the Nova 5 comes with the new Kirin 810 SoC. The processor was manufactured in the 7 nm process and offers a total of eight cores. These are two 2.27 GHz Cortex A76 cores and six 1.88 GHz Cortex A55 cores. A Mali G52 GPU provides graphics performance. The whole thing is supported by 8GB RAM. For the first time, an AI processor was also installed in Huaweis mid-range smartphones.

A Pro model was also announced for the Nova 5. This differs essentially by the faster Kirin 980 SoC from the standard variant. Both devices are delivered with four cameras on the back. These are a main camera with 48 MP, an ultra-wide angle camera with 16 MP as well as a depth sensor and a macro camera with 2 MP each. You shoot Selfies with a 32 MP f/2.0 camera, which is in a small teardrop notch. The fingerprint sensor is built into the 6.39 inch OLED display of both versions.

With the Nova 5i, Huawei also introduced a more budget-oriented smartphone. Here only one Kirin 710 SoC works under the hood. Four cameras remain on the back, but some of them also get a small downgrade. The main camera resolves with only 24 MP, the wide-angle camera with only 8 MP. The depth sensor and macro camera remain unchanged.