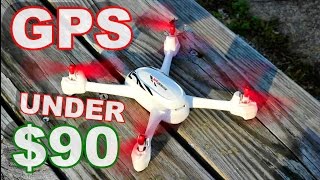 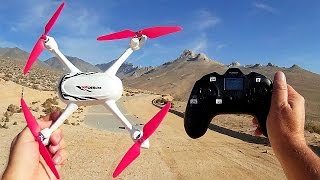 The new Hubsan X4 Desire H502E is one of several new successors to the well-known Hubsan X4 series. The X4 series is well known among hobborne pilots and has been highly appreciated for its great value for money. Now Hubsan is launching new X4 models with more functions and features. The new Hubsan X4 Desire H502E drone has great flight characteristics, which it owes to the aerodynamic design and the built-in 6-axis gyro system. New functions and features are available to the pilot, some of which are perfect for beginners and newcomers. Even an untrained person can learn and internalize how to control the drone within a few minutes. The headless mode also helps. In this flight mode, the pilot does not need to pay attention to the current orientation.

The new Hubsan X4 Desire H502E drone has an altitude mode. This automatically holds the drone at the last controlled altitude when the pilot releases the flight sticks. Without such a mode the pilot must permanently correct the altitude. This function is very useful for beginners. As soon as the flight sticks are released, the Hubsan X4 Desire H502E drone holds its own height. A Return-To-Home function is also integrated. At the push of a button you can let them return on their own. This can be helpful with a low battery when you want to end the flight or when the drone threatens to crash over water. The flight duration is longer than on the previous X4 models. Now you can fly the drone for 12 minutes before recharging the battery. The battery must then be charged for approx. 40 minutes.

It may be worth purchasing multiple replacement batteries if you like the Hubsan X4 Desire H502E drone. So you can fly longer before you have to recharge the batteries to be able to fly again. The drone measures 165 x 165 x 60 mm and weighs approx. 150 grams including battery. On the underside are 2 differently coloured LEDs, which show the pilot the current flight orientation and also enable night flights. With the built-in 720p HD camera you can take breathtaking aerial photos and get a new perspective of your surroundings. Those who want even more features can buy the Hubsan X4 Desire H502S FPV drone, which has an FPV function and a Follow-Me mode. If flying and filming is enough for you, the Hubsan X4 Desire H502E drone will satisfy you. The radio range of the supplied remote control is approx. 200 meters. The batteries required for the remote control are not included.