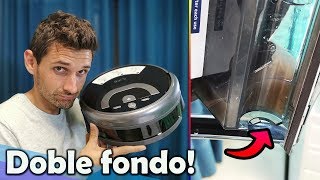 Anyone who thinks about autonomous household work inevitably ends up at the company ILIFE. The subject wiping has already begun there with the announced a few weeks ago ILIFE X800 suction robot with wiping function already, now was presented with the W400, the first wiping robot of the Chinese manufacturer. It will take a few days until the official launch, we have all the information in advance.

Wiper robots as such are no novelty, but previous models could not convince the end customer. The demand is quite there, also here in the editorial office we receive many inquiries about wiper robots. The problem so far: Wiping robots distributed water on the floor and then picked up with the wipe or other materials, the dirty water – and distributed that in turn on already clean places.

And that’s where ILIFE has started to put its core competence into the W400: it picks up dirty water and packs it into a 0.85-liter tank. So you run (if it works well) not as before danger, already polluted places by renewed Drüberfahren to pollute.

The robot goes through four steps during a cleaning process – and does not leave a drop of water, At the end of the process, according to the manufacturer:

Due to the height of the robot, pieces of furniture under which it is intended to wipe must be more than 12 cm above the floor. That’s the disadvantage of two very large water tanks. There is no evidence for a carpet detection, without this one must bring the carpets out of the danger zone before using the robot.

The developers of iLife know especially with Saugrobotern out, according to them have used their expertise: Four of us known by sucking colleagues modes were umgemünzt on the W400.

The cleaning modes including function and application area are listed briefly:

The decisive factor will be how much pressure the W400 gets on the floor to be cleaned with the wipe. If the rotating roller on the underside does a great job here, I see a chance that the robot can also deliver satisfactory results. So far, there is still a lack of exciting information about the robot, such as whether it can also be controlled by app or remote control. At least he can be controlled by buttons on the top.

The ILIFE W400 will go on sale on 11.11, The Singles Day in China. Early Birds can pre-order the robot now. Personally, I am skeptical that the W400 can achieve the advertised results with its work. ILIFE has rarely disappointed us in the past and brings with it a fairly high standard of engineering, but wiping household robots have always been a pretty hot place for developers. It could be a step in the right direction that ILIFE is doing here, especially that the bottom of the robot is also “dried” after wiping.

Something’s going on! Whether the most problems with the ILIFE W400 have done, the next weeks will show. Of course, everyone has to decide for themselves whether manual wiping with a mop is not more useful. And who knows: Maybe the wiping function of the new ILIFE X800 is so good that you can suck and wipe in one go. Here too we will keep you up to date.