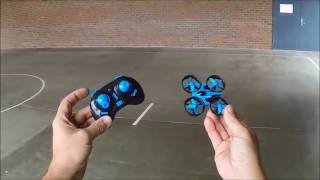 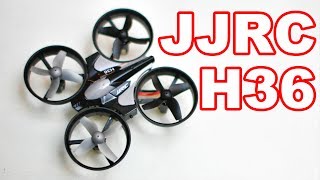 The JJRC H36 is one of the best drones for beginners. It is a drone of great strength and ease of flight thanks to its protections and the design of its propellers. The JJRC H36 fits in the palm of your hand. With only 22 grams. of weight is in interiors where better it is going to respond, but you can also fly it outdoors in days without wind. This mini drone can be found not only as JJRC H36 but also as Eachine E010 Mini. They are the same mini drone but manufactured by different companies. Below I leave you also buy links for the Eachine E010 Mini so you can compare prices and decide on the cheapest one. The JJRC H36 is one of the best drones you can find today to start flying without having to spend a lot of money.

The JJRC H36 has dimensions of 8.5 × 8.5 × 3 cm that fit in the palm of your hand. Its weight with battery is 22 grams. It has a 3.7V / 150mAh battery with a flight time of about 6 minutes and a charging time of about 30 minutes. The battery is interchangeable, so you can extend your flight time by acquiring extra batteries.

The JJRC H36 is built in poly carbonate which makes it very resistant to knocks and falls , something very important in our first flights. It comes with some protectors already incorporated and with a unique propeller design that makes it very stable in flight.

The flight of the JJRC H36 has a very stable flight and it is easy to learn to fly it. To facilitate this learning has two flight modes. One slower for beginners to take control and learn to fly and one faster for experienced pilots with which to make twists and turns. The JJRC H36 is for flying, mainly indoors due to its light weight, but you can also fly outdoors in days without wind.

The JJRC H36 is a very tough drone. Its poly carbonate structure and the protection of the propellers make it able to resist blows and forced landings, something to keep in mind if you are a beginner. The JJRC H36 comes with the headless system or headless mode by which the drone is oriented automatically without having to distinguish the head or tail of the drone. It has some LEDs to facilitate the flight in low light situations. You also have an automatic return button to our position.

The JJRC H36 is equipped with a radio control with which you can fly the drone to a maximum distance of 30 meters. From the radio control you can activate the different types of flight, as well as the headless mode or a button with pre-programmed pirouettes. Its design is ergonomic and pleasant to handle.

The JJRC H36 has become the reference drone of many users for its resistance, stability and versatility and the point of departure for many to begin in the world of racing drones with first-person flight, tuning the device to turn it into an FPV drone (first person flight).

The JJRC H36 is one of the best mini drones on the market for its stability and robustness that make it perfect for flying indoors and to start flying drones for very little money.

The JJRC H36 has become the reference drone of many users for its resistance, stability and versatility and the point of departure for many to begin in the world of racing drones with first-person flight, tuning the device to turn it into an FPV drone (first person flight). The JJRC H36 modified is what has come to be called Tiny Whoop.

A Tiny Whoop is a JJRC H36 that has been replaced by more powerful engines and a mini FPV camera has been installed as the Eachine EF-01. If you want more information about the Tiny Whoop and how to make yours visit Mini FPV racing drones for indoor Tiny Whoop.