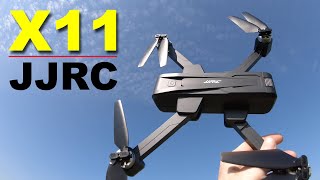 In our last test, we took a close look at the JJRC X11P 5G drone. This model has a uniaxial gimbal and a good camera. It is also available for a reasonable price and is currently reduced by more than half. The innovative flight technology of the quadrocopter, the attractive design and the multitude of intelligent flight modes make it a real all-rounder for newcomers.

We were particularly impressed by the overall package of the drone. There are so many great functions, such as the multi-point flight, the follow-me function, the return to home mode and the automatic take off / landing. In addition, the aircraft can hover in the air completely stable and maintain its height without the drone pilot having to operate the model or actively intervene in the flight process.

Visually, this aircraft also makes a lot of things, you can simply fold the JJRC X11P drone comfortably and so much easier and stow away. Thanks to the integrated WiFi function, there is also plenty of flying fun. For example, you can control the quadrocopter from a first-person perspective, use GPS and let the drone fly back to you at the push of a button.

The drives of the JJRC X11P RC drone ensure strong lift and extremely high acceleration. Here 4 electric motors of the type 2204 with up to 1350 kV were installed. The quadrocopter is controlled with a remote control plus smartphone holder and an app.

As far as the transmission of the radio remote control is concerned, you can operate the model up to a transmission range of 1,600 meters away. However, the 5G WIFI only maintains stable image transmission up to 800 meters, in which the images are displayed in true detail without distortion or image errors.

Sometimes these image errors appear even from 300 meters. Correctly, a 5G WIFI real-time transmission range at 300 to 800 meters must be specified. A particularly stable flight position is absolutely guaranteed with this model. The drone pilot can simply take his fingers off the controls and the quadrocopter will still remain stable in hover without drifting in one direction.

This is ensured, among other things, by the combination of precise GPS location, visual positioning and optical flow positioning. The drone can defy wind resistance up to level 3. The maximum flight speed is around 40 kilometers per hour, with the maximum ascent speed 3 m/s and the descent speed 2 m/s.

The quadrocopter has a very strong battery, it provides enough potential at an operating voltage of 7.6 volts to be able to supply the powerful electric motors with a lot of energy. The flight battery has a charge capacity of 3400 mAh. With this amount of charge, you get about a flight time of up to 20 minutes at a time, after which you have to replace or recharge the battery.