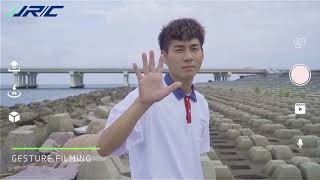 The JJRC X13 is an amateur drone equipped with GPS positioning system, brushless and folding engines. It features an HD camera on a 3-axis stabilizer so your videos and photos are stable despite the drone’s movements.

The JJRC X13 measures 25.7*16.5*25.7cm when folded and 34*34*15cm when unfolded and weighs 460g. A drone that you can easily take with you and that also comes with a very practical carrying bag. It incorporates a 20C 7.4V 2200mAh battery with a flight range of 19 minutes. You can extend your flight time by purchasing extra batteries along with the drone.

It has a GPS positioning system which provides a stable and safe flight. With the GPS system, the drone knows its position at all times and is able to maintain a stable height even if the controls are released. For indoor flights or in areas with poor GPS coverage, it has height maintenance systems by optical, barometric and sonic positioning. In short, a drone of great stability both outdoors and indoors.

Added to the stability is the power provided by its four powerful brushless motors. These motors require almost no maintenance and are very durable. It is equipped with a 1080P HD camera that takes videos and photos and you can adjust it to a 90 degree angle from the control. The camera is housed in a three-axis stabiliser that absorbs drone movements, providing a stable image at all times. The camera has a WiFi connection that transmits the images to a mobile device in real time. To do this you have to install a free app on your device and synchronize it with the drone’s WiFi signal (Android and iOS compatible). From the app’s screen you can see the images captured by the camera in real time, as well as pilot the drone without the need for radio control and access the drone’s functions and flight modes.

As we have said the flight of the JJRC X13 is very stable and safe thanks to its brushless engines and GPS positioning system. The GPS system allows you to have intelligent flight modes such as Follow Me, automatic flight around a target or program routes for the drone to run autonomously.

In Follow Me mode the drone follows you autonomously without you having to touch the controls. It’s perfect for recording your leisure time or while playing your favorite sport or activity. The JJRC X13’s camera can take pictures of you with a simple gesture. It is an ideal drone for selfies. You can pilot it from the app as well as from its radio control. The ideal is to use both devices because the radio control has a support to place the mobile and pilot with the precision of the control seeing the images in real time.

The drone will also automatically return to the launch position in case of signal loss or low battery. From the radio control you can also change the camera tilt to make the best videos and photos.