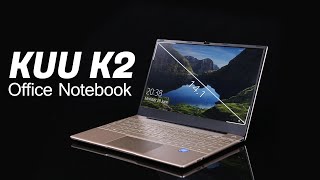 Do you know KUU? No? It’s okay. We are not very familiar with it either, until recently. But the second model KUU K2, available on Gearbest, offers quite respectable technical data for the currently reduced price. So let’s not beat about the bush and take a closer look at the Chinese Ultrabook. Why is it the second device, because we have introduced its first KUU K1 before.

The KUU K2 is largely made of aluminium and weighs 1.35 kilograms. At 320 x 220 x 16 millimetres, it is average in size for a notebook with a 14.1 inch screen. The keyboard is tone on tone with the lower part of the notebook. The edges around the display are black, the color and design of the lid are actually unknown to us, as it is not visible on any of the pictures.

Connections are of course extremely important and that is why the KUU K2 offers a lot of them. What is unfortunately missing: USB-C. With it you also lose the possibility to use Thunderbolt 3. This is an extreme pity, but unfortunately not unusual in this price range. But we get two USB 3.0, HDMI, a jack and a card reader for micro SD cards served here. The power comes via a proprietary connection.

Inside the KUU K2, the elderly Intel®Celeron 4115 does its job. This chip – a dual-core processor with four threads to be precise – was already introduced at the beginning of 2015 and is manufactured using the 14-nanometer process. In the KUU K2, the processor is supported by eight gigabytes of LPDDR3 RAM. The Intel Iris Graphics 600 functions as GPU. The capacity of the built-in SSD is selectable – 256 and 512 gigabytes are available. Whether the hard disk is connected via M2 or PCI-E is not clear from the available information.

The 14.1 inch IPS display of the KUU K2 has a resolution of 1920 x 1080 pixels. In addition, the edges around the screen are relatively thin. To protect the eyes, the panel offers a switchable blue light filter. According to the manufacturer, the 38 watt hour battery should ensure a long battery life. The specifications don’t get more concrete, though. Also not very concrete is the statement that the battery should recharge quickly. Such vague information almost makes us assume that the notebook hasn’t been sufficiently tested by the manufacturer or that production hasn’t even started yet.

The KUU K2 can be ordered immediately. The current prices for both memory variants can be found below in the price comparison. According to Gearbest, the delivery time via Priority Line is ten to 25 working days and the preparation for shipment takes up to five days. The current price is quite attractive, the built-in processor was also used in the MacBook Pro Retina 13 from 2015, among others. At that time, the chip was quite convincing, but from today’s perspective, it can probably be classified more in the lower middle class. And as always, individual specifications don’t mean anything in the end if the interaction of all the elements doesn’t fit. Our conclusion about the KUU K2 will be published in the detailed test report in a few weeks.