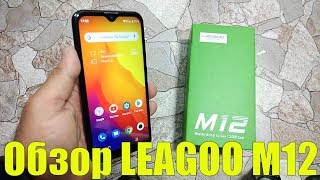 With the Leagoo M12, the Chinese manufacturer Leagoo has recently introduced a smartphone lightweight with numerous extras. The device offers many modern highlights, some of which are missing even in the middle class.

Anyone who doesn’t necessarily want to invest a lot of money in a new smartphone can nowadays be happy with a mobile phone for beginners from China. These often cost only a fraction, but offer some of the most important technical innovations on the market. This also applies to the new Leagoo M12. The manufacturer has installed numerous useful highlights, such as a dual main camera with 8 and 2 megapixels, a fingerprint sensor, a face recognition function and two slots for SIM cards. The device also seems to perform quite well in terms of workmanship. Instead of using cheap plastic parts, the manufacturer relies on a glass layer on both sides and a metal frame. In addition, the case-to-display ratio is quite good thanks to the 19:9 format even with a waterdrop screen.

Although the numerous modern features speak for the entry-level smartphone, it is understandably not possible for manufacturers of low-price devices to completely adapt the phone to more expensive mid-range devices. The Leagoo M12, as well as many other Chinese mobile phones, has saved on screen resolution, performance and memory. Although the smartphone has a comparatively large 5.71-inch display, it only offers HD resolution and consequently a low pixel density of 295 ppi. The built-in Mediatek MT6739V processor has only four cores and a low maximum clock frequency of 1.5 GHz. As far as memory is concerned, only 2 GB of RAM and 16 GB of internal memory are available to the user. With the latter, a large part of the operating system is already used ex works. As a result, the internal memory will quickly reach its limits without a micro SD card.