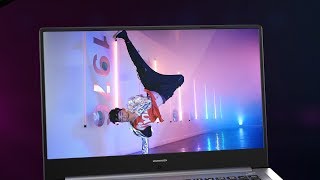 In the recent past, Full Screen has been designed with the ultimate visual enjoyment, not only on mobile phones, but also in notebooks. Notebooks with full-screen design have a high screen ratio, which can reduce the size of the body and improve the portability of the computer while improving the visual effect. When it comes to full-screen notebooks, Mai Benben recently released a new product: Xiaomai 6A is a notebook that looks great in both appearance and performance. Let’s take a look at it.

The AD face of the Mai Benben Xiaomai 6A is made of metal, and the A side has two sharp lines on the left and right symmetry. It is officially called the “streamline wing” design. Its workmanship is very refined, it looks simple and not monotonous. The design with no logo on the A side is not only special, but also has a space for DIY. The D surface is equipped with a large-area air outlet, which is made of metal as well as the A side. The metal heat conduction function can greatly improve its heat dissipation efficiency.

Not only that, the Xiaomai 6A is also very thin and light, with a weight of about 1.64kg and a thickness of 16.9mm. From the data and pictures, it can be seen that this notebook is very portable.

After opening the screen, we can see that the screen of Mai Benben Xiaomai 6A uses the most popular narrow border design, which accounts for more than 80% of the screen. This design not only increases the screen ratio of the product screen, but also allows for a larger screen size in a compact body. In addition, the screen of Mai Benben Xiaomai 6A is still an ADS high-definition display with a resolution of 1920×1080 and a viewing angle of up to 170 degrees. The detail display is very real and delicate, and the image is still clearly visible from any angle.

Let’s take a look at the Xiaomai 6A’s keyboard: its keyboard removes the numeric keypad we rarely use, so the buttons are designed to have wider margins, better typing and better accuracy. The palm rest area is also relatively large, allowing users to enjoy a more comfortable input experience.

On the left side of the fuselage, it has 1 HDMI interface, 2 USB3.0 ports, 1 Type-C interface and power interface. On the right side of the fuselage, there is a USB 2.0 interface, an SD card slot, a 3.5mm headset interface and a security lock. In general, such an interface design can meet most of the user’s needs for data transmission, video output, and peripheral connections. At the same time, with fast charging technology, it can be filled with 70% of electricity in one hour.