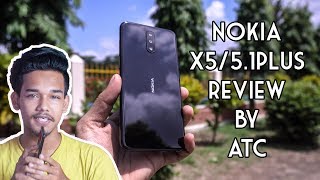 The Nokia X5 was presented in China in July 2018 is shown as a new mid-range model of large finishes in glass and metal, but at a contained price. Among the innovations in its technical sheet we find a screen with notch, as well as Android 8.1 Oreo native, without layers of customization as an integrated model in the Android One program.

The Nokia X5 processor is the MediaTek Helio P60, a SoC with a quad-core ARM Cortex A73 architecture at 2.0 GHz and four ARM Cortex A53 cores at 2.0 GHz. Inside we also find an ARM Mali G72 three-core GPU and a maximum working frequency of 800 MHz.

The section of the memory of the Nokia X5 offers us several versions. The most basic has 3 GB of RAM and internal memory of 32 GB. We found a second version that consists of 4 GB of RAM and 64 GB. In either case, Nokia offers a hybrid slot in which we can include a micro SD card of up to 256 GB to expand the internal storage space.

The battery of the Nokia X5 has a maximum capacity of 3,060 mAh. A capacity that offers autonomy levels such as an average usage time of 27 hours, up to 17.5 hours in calls, up to 19.5 hours in music playback and 12 hours of video or up to six hours for video games.

The section of the connections of the Nokia X5 stands out for having a USB-C connector, but also for continuing to adopt the 3.5 mm mini jack for headphones. As far as wireless connections are concerned, we have a smartphone with 4G connectivity, WiFi N, Bluetooth 4.2 and assisted GPS compatible with the GLONASS, BeiDou and Galileo satellites network.