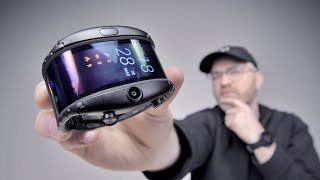 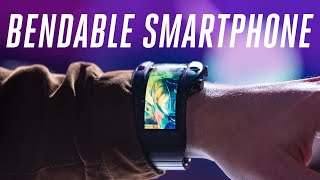 Short trip to the year 2028. Your phone rings, out of habit you look at your wrist. Face Detection unlocks your bracelet’s display and automatically picks up the call and you’re immediately in the video conversation.

Is it really true? We can only guess, but a first step into this future could be the Nubia Alpha  (Nubia α), a fully functional smart phone with touch display in a wristband.

What is referred to as a concept smartphone is actually supposed to come onto the market in this form. It is a smartphone integrated into a wristband that has a camera and a touch screen. The screen is flexible and slightly bulges around the wrist at the top and bottom.

Apparently, the Nubia Alpha is also operated via two buttons, which are located on the left and right of the middle part of the bracelet. In addition, you will of course use the touch screen. In the product video Nubia presents the new hybrid of phone and bracelet:

The camera sits on the top, so it faces the wearer and probably intended especially for selfies and video calling. Details have not yet been announced – as to the actual all Specs of the device. So missing in addition to the camera resolution and information about the built-in processor, the operating system and the battery. However, what has already been said: The Alpha will have full 4G support; fast mobile internet is not a problem.

There is also a sensor on the bottom. This will probably be the measurement of the heart rate possible, which is also indicated in the video. There is an app called “Heartrate Detection” to see; There will also be a pedometer.

The smartphone of the future?

Nubia herself says that science fiction was the inspiration, and that’s definitely what Nubia Alpha looks like. Whether this is really the future of telephony remains to be seen. Smartwatches have not yet managed to become a real alternative to smartphones. And concepts like Google Glass, which was traded a few years ago as a potential forward-looking technology, today seem like a joke. Lenovo had developed a similar device a few years ago (a large screen bracelet), but it never appeared.

So can the phone on the wrist do better, where other concepts have failed so far? Smartphones from Nubia have been nice tous so far (our review of the Nubia Z17 Lite ); With devices like the gaming smartphone Nubia Red Magic you are already trying to reach different target groups. But who is the target audience for the Nubia Alpha? According to the manufacturer, it will be released in the fourth quarter of 2018. What do you say about the hybrid of smartphone and wristband?