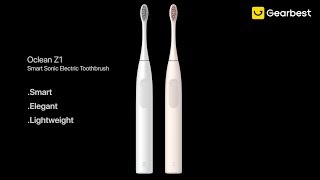 Almost a week ago, images on a toothbrush with an OLED touchscreen appeared on the Weibo social network, which was said to be produced by Xiaomi. Recently, it made its presence on the crowdfunding platform of Xiaomi, and within a few hours it managed to raise the amount needed to start mass production.

Also, The Z1 Built-in 6-axis gyroscope for blind zone detection in eight areas, help you analyze the way of brushing teeth, and develop good brushing habit. You can check the brushing results via the App. The app provides more than 20 brushing schemes and hundreds of customized brushing schemes. Set the best intensity and comfort for yourself.

The higher the bristles density, the stronger the cleaning power, Eliminating the possibility of producing copper oxide on the brush head 1.4 Times Roundness Rate, gently brushing teeth without hurt gums. Thanks to Built-in smart chips and sensors, one button operation, no need to repeatedly adjust, simple to use. The Oclean Z1 equipped with magnetic suction metal ring on the bottom,which is not moldy and odorless in the humid environment.

I have to admit that I like the idea of ​​Oclean, even though I don’t know how useful that screen actually is. Most likely, that display is intended to replace the phone. It is no longer necessary to keep your eyes on the phone for information on brushing, autonomy or when head replacement is required. Now, all this information is available on the integrated screen. I’m not saying that it looks great, it makes the electric toothbrush a cool gadget that many will want.

Obviously, all the information and statistics can be tracked with the help of the dedicated application. As a design, Oclean Z1 is similar to the models present in the Chinese manufacturer’s portfolio. In addition to that screen, the toothbrush also brings some improvements to the brush chapter, being provided with 32 levels of intensity that can be set according to each one’s preferences and needs. The built-in gyroscope can identify and monitor 8 areas of the oral cavity, also reminding you, through notifications, and the ones you have omitted to brush.

It comes with Bluetooth 4.0 and can be used with any Android or iOS phone. Unlike previous models, at Oclean Z1 the charging dock can be attached to the wall, so the brush will no longer occupy the place of the bathroom shelf. The battery has a capacity of 800 mAh, and this means that the brush can be used even one month after a full charge. According to the manufacturer it is loaded into its special carrier within 2 hours.