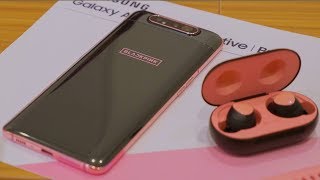 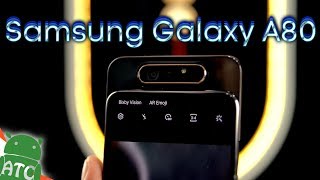 As announced, Samsung is bringing its Galaxy A80 to Germany: The smartphone has an extendable and rotatable main camera, which also serves as a front camera. However, the triple camera of the Galaxy S10+ is not used.

The Galaxy A80 comes to Germany: Samsung will sell its smartphone with rotating main camera in Germany for 650 Euro. The device is already available in Samsung’s online shop and will also be available in other stores. The smartphone was originally announced for May 2019.

The Galaxy A80 impresses above all with its camera: The main camera, which has three lenses, can be extended and rotated forward. This means that it also serves as a front camera, with which better pictures can be taken than with conventional cameras on the front.

Due to the rotatable main camera, Samsung does not have to install a camera on the front of the Galaxy A80. The 6.7 inch display is not interrupted by a notch or a camera hole and can fill almost the entire front. The resolution is 2,400 x 1,080 pixels, which results in a pixel density of almost 393 ppi.

Inside, a SoC with eight cores and a maximum clock rate of 2.2 GHz, not specified by Samsung, works. The main memory is 8 GByte, the built-in flash memory 128 GByte. The Galaxy A80 doesn’t have a slot for micro SD cards.

The smartphone is delivered with Android 9.0. The battery has a nominal charge of 3,700 mAh, Samsung doesn’t give details about the battery life. The smartphone can be quickly charged thanks to a 25-watt charger.