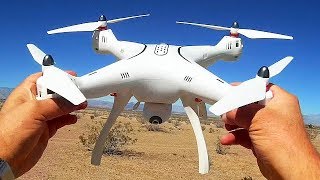 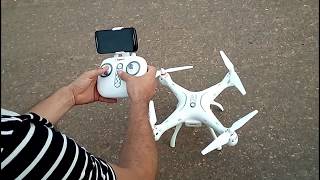 The Syma X8Pro is one of the most discussed novelties in the niche of budget UAVs. It is a continuation of the popular among beginners and fans of the X8 series. For the first time the drones were talked about in August, where teaser photos promised users an updated design in a glossy “Phantom 4” style and a GPS module for the first time on board, which theoretically had to significantly improve the positioning accuracy and, in general, positively influence piloting by a drone.

In fact, 90% of observers recommend refraining from buying a quadrocopter at least until the first stable positive feedback. Despite the detected bug, some stores still continue to implement the product, not paying attention to the recommendations of users. That’s why we decided to tell you about this novelty in detail. This review will be more interesting for those people who are in meditation to take or not to take, or not at all about the Syma X8Pro.

Before the consumer, the Syma X8Pro comes in the same size as the previous models of the eighth series, but with a completely updated look (followed by the X8Pro will appear models for the simpler X8SW; X8SW-D in a similar design). The quality of performance truly deserves respect. The main body, as it was, is promised, is executed in glossy plastic in the style of Phantom 4 and looks very impressive from the side. The button of inclusion in accordance with modern trends is located on the top of the drone, the battery now like all premium UAVs does not require fuss with power wires, and the carrier screws received a quick-mounting mechanism. Well, the most long-awaited features of the quad were the GPS module and the remote-controlled angle of the camera’s 1MP lens.

The Syma X8Pro is equipped with collector-type motors , the torque is classically transmitted via a gear. No other information about the motors is reported by the manufacturer, but we suspect that these are the same motors that were used to equip the previous X8HW model . In general, the stock pulls abundantly, it is known that the quad easily manages the cameras of the third and fourth generation of GoPro HERO (the weight of the cameras is up to 74 grams, suspended on the axle suspension). And it does not take off with the GoPro3 camera suspended on a 2 × axial plastic B / K suspension – Walkera G2D (suspension weight 130 grams without camera).

On board the Syma X8Pro Quadrotor is a 1MP Wi-Fi camera with a 90 degree viewing angle (FOV), the video transmitter of which has become noticeably more powerful, but still broadcasts at 2.4GHz, thus limiting the potential of the radio transmitter of control equipment. A similar camera was equipped with the previous model X8HW (only in another “case”).

The camera is installed in a non-axial suspension, executed in the same style with a general design of the drone. In contrast to the glossy case X8Pro, the suspension with the camera, as well as landing supports were matte white. The new eight camera for the first time boasts a variable angle of the lens inclination from the buttons on the control equipment (15 ° 30 ° 90 °).

The quality of the photo and video shooting is below average, and therefore the stock camera is only suitable for first acquaintance with FPV flight and no more. All the material to be removed can be recorded on a microSD card (purchased separately) pre-installed in the camera slot before the flight, and on the memory of the used IOS / Android smartphone (the second method is more power-consuming).

The picture output from the drones camera is carried out classically on the mobile device by means of the free application “Syma FPV”, which must be downloaded in advance.

According to the manufacturer’s specification, the distance of the FPV removal is no more than 70 meters. In practice, this distance in the area free from interference was a record 170 meters (control is cut off, the picture remains stable).

The Syma X8Pro battery pack is packed into the box and installed in the drone as in most UAVs of the premium segment, no wires or plugs. In the box, all the same two cans of lithium-polymer (LiPo) batteries with a capacity of 2000 mAh. According to the specification, the flight time is not more than 9 minutes. In practice, with a mixed style of FPV piloting in windless weather, this time was about 7-8 minutes. Charging time is not more than one and a half hours.

The X8Pro is not equipped with the standard control equipment for the eighth series of Syma. Externally, the console is identical to the Symra X5UW quadrocopter equipment (as well as X8SW, X8SW-D, X15W, X21W, X22W, X23W), but the internal filling of the console was completely redesigned and the radio transmitter became noticeably more powerful. That’s why the presented model can now be removed in the FPV mode beyond 70 meters.

Note the minimal set of buttons on the equipment, this was achieved thanks to the left and right sticks that took the role of buttons responsible for trim (left stick), change of costs and activation of the mode Headless (right stick). Power is provided by four AA batteries (purchased separately).

Geomagnetic correction – must be carried out before every first departure. For this, before you start taking off, set the quadrupter to the maximum horizontal position:

Correction of the horizontal position or calibration of the gyroscope – it is recommended to carry out basically after each crash and once before each first take-off. To do this, before taking off, set the UAV to the maximum horizontal position. On the control equipment, simultaneously translate both sticks into the lower right corner and hold them there for 2-3 seconds. Calibration is complete.

As noted above, most of the Symra X8Pro reviewers generally report the same problems, due to which the operation of the drone is not possible on the basis of security considerations :

All these symptoms manifest themselves at different intervals and are unpredictable. At moments when the bug does not show up, the drones show distinctive dynamics, controllability, and positioning accuracy. We strongly recommend that you refrain from buying Syma X8Pro before stable positive reviews appear.

Of course, the introduction of the GPS module should positively affect the piloting of the Syma X8Pro and if you exclude the main disadvantages, the Symra X8Pro quadrocopter will by tradition become one of the best budget drone in the category up to $ 150. I really want to believe that the developer in a short time will eliminate all identified problems. The main category of consumers are beginners and amateurs from the age of 14.