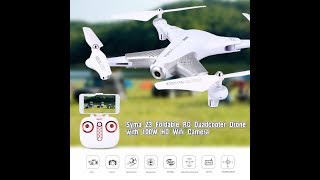 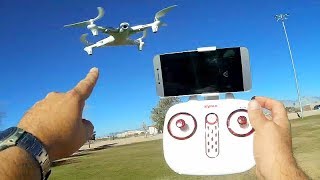 The build quality of Syma Z3 is quite consistent with the name of the manufacturer. Dron received a plastic case, which has special niches, into which the beams and propellers are removed. By the way, in this model the propellers are folded in half, which is not the norm for cars of this class and this price category. If desired, the pilot can close the propellers with elastic protectors, for the installation of which the tool is not needed.

In the nose quadrocopter is a course camera. The on-board battery is enclosed in a perforated case, placed in an open compartment and reliably fixed with a special latch. The power is turned on by the button located on the lid of the aircraft. There you can see a few dozen small ventilation holes. Form Z3 completes the headlights and the aft LED strip.

The car keeps in the air quite confidently, but its parameters of radius and flight time are frankly small – 70 meters and 7 minutes respectively. It should be borne in mind that weather conditions can significantly reduce these parameters.

On a weak charge, the drone is signaled by the flickering of the onboard lights. This means that it must be urgently returned to the starting point. If the operator does not respond to light signals and the battery level reaches a critically low level, the machine will land on its own. In those cases when an aircraft falls to the ground or becomes entangled in the crowns of trees, it accidentally turns off its engines, preventing them from overheating and jamming.

The stabilization system is represented not only by standard equipment (gyroscope), but also by a barometric pressure sensor. Based on the latter, the function of holding a height (Constant Altitude) and the hover function (Hover), which reduces the impact of vibration on the quality of shooting.

The drone can automatically take off and land, go into “headless” mode and fly in two high-speed modes. Full expenses turn it into a fast enough and maneuverable aircraft, although not adapted to perform aerobatics. The manufacturer equipped its new product with the Track Mode mode, in which the pilot simply draws a flight path on the mobile device’s screen, and Z3 should repeat it in the air. Position control is performed in accordance with the optical flow algorithm, based on the analysis of the displacement of two consecutive images.

The Syma Z3 is equipped with the simplest collector electric motors. The resource of these engines is small, but they are cheap and affordable.

The battery is enclosed in a special protective cover. It does without power cable, since it interfaces with the aircraft directly through the built-in connector. The package includes a USB charger, which can be connected to a computer and charge the battery in about 2 hours.

Built-in fuselage course camera has a matrix of 1 Mpix and is capable of shooting in 720P (1280 × 720 pix). The camera tilt angle is manually changed, but the shooting mode (photo or video) is set by the operator remotely. The image can not be called outstanding, although the Hover function slightly improves picture quality.

Syma Z3 comes without a remote control. It is assumed that the mobile device of the owner of the aircraft can replace a full-fledged control panel. For these purposes, the application SYMA Fly is developed. The program displays virtual sticks, trimmers and a number of control buttons on the smartphone or tablet screen – auto-reset / auto-landing, cost-switching, Headless mode selection, photo / video launch, etc. A separate button turns on the Gravity mode, which uses the built-in G-sensor mobile device and allows the management of drones by elementary slopes and turns of mobile equipment.

The control signals are transmitted at a frequency of 2.4 GHz and use the capabilities of the Wi-Fi system. Live video arrives via the same communication channel and can be played on the smartphone / tablet screen during FPV flights and stored in the memory of the mobile device.

The Syma Z3 is an interesting, but not an outstanding folding model. He is not able to blow up the market of selfish drones, since most of his competitors have approximately equal characteristics and capabilities. However, this device appeared on sale quite recently and has not yet passed a comprehensive user run-in.

Among the positive moments, we will select the collapsible screws, the flight along the route and the mode of holding the altitude. A convenient application Syma Fly allows you to abandon the usual control panel.

The budget price tag forced the developers to use a cheap but not very reliable Wi-Fi channel to manage. For the same reason, the drone received collector motors.