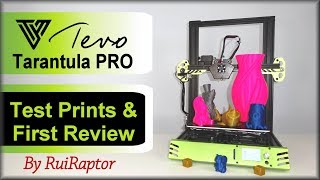 What can you say about the TEVO Tarantula Pro 3D printer in general Low cost of any equipment is always caused by some problems. In the case of Tevo Tarantula, I see three problems: the use of cheap material in the production of parts, acrylic, savings on profiles – and this, the frame is simplified so much that without attaching the printer to a hard surface, it is difficult to use it. And the third problem, the assembly of the printer, which may seem pleasant to few people.

But along with this, you can see that the company Tevo adds a nice change in equipment.
Over time, the tarantula began to be equipped with an anodized profile. To strengthen the frame, added internal overlapping corners. The control board is usually the latest version at the time of sale. The power supply was previously 250W, now it is equipped with a 300-watt power supply. The heated table became not with soldered daisy chain, but with a connector.

Who knows, maybe over time there will be changes in the design, or at least the carriage Y will be changed. In general, as well as any budget 3d printer, tarantula requires improvements, which will have to be done.

I hope this review of TEVO Tarantula Pro will help you both in choosing an inexpensive budget printer and in solving any problems with it, if you own it. I believe that for its not a lot of money, Tevo Tarantula is not a bad printer and in the drain, at low speed it is quite capable of printing details with quality on four.