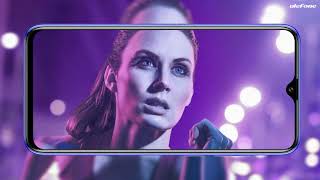 Ulefone has unveiled some of the technical features of the new Power 6 that he intends to present next week at the MWC 2019. This is not a replacement for the Power 5 and Power 5S launched last year, even now the smartphones with the most powerful battery in the world.

The quite successful Ulefone Power series, which consists exclusively of smartphones with large batteries, will be continued. Today the manufacturer introduced the Power 6 and brings its “Akku Monster” up to date. This time they return to a rather elegant design, after having dared an excursion to extravagance with the Power 5. The colours black, blue and red not only make it colourful, but also visually interesting with the light effects on the back. Whether the back is made of glass or not is not revealed by the manufacturer.

In any case, it is pleasing that the Ulefone Power 6 will be much more compact than its predecessor. With 159.15 x 75.8 x 9.95mm, the device is downright compact, considering that a 6,350mAh battery is installed here. The weight of 207g is also impressive.

The Ulefone Power 6 with its slim bezels is also modern on the front, but does not do without a notch. After all, it comes in a Waterdrop version and the 6.3″ display (2340 x 1080) covers 93.9% of the front. Behind the display is a Helio P35 SoC from Mediatek. So the Ulefone Power 6 isn’t a performance miracle, but it’s economical. It’s pleasing to note that Android 9.0 Pie will be in the game right from the start.

In addition, the Ulefone Power 6 offers support for NFC including Google Pay, Galileo positioning and even Bluetooth 5.0. The memory is rather small with 4GB RAM and 64GB memory, whereby the 4GB RAM for the Helio P35 are of course completely sufficient. If the 64GB memory is not enough for you, you can upgrade via Micro SD card, as long as Dual SIM has no priority.

What the Ulefone Power 6 unfortunately lacks is a 3.5mm connector. Since there is neither an IP certification nor limitations by the case thickness, the step cannot be comprehended. The Type-C connector is used with a supplied adapter for audio output. It is also used for data transmission and charging (5V / 3A). The Ulefone Power 6 can also be used as a Power Bank. A corresponding Type-C to Type-A (female) adapter is included.

The camera equipment still remains to be mentioned and here the data sheet is relatively reserved, which at the same time raises the hope that Ulefone offers a decent performance here – after all, the Power 5 had already managed that. On the back a simple dual camera with 16MP main and 2MP secondary sensor awaits you. The main sensor should come from Sony and be equipped with a large f/1.8 aperture. There are no more details about the 2MP sensor. For Selfies there is again a 16MP sensor, which Ulefone also with a f/1.8 aperture equipped. So even with little light usable selfies should be created. Since Face Unlock uses the front camera, this feature should also benefit from the large aperture.