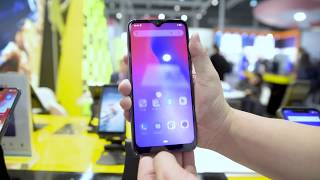 Ulefone S11 is one of Huawei Mate 20 PRO Clone Phone, I do not know how successful it is. It is enough to look at the location of the main chambers, and we will find that Ulefone has little inspiration at the moment. It’s not something out of the ordinary, many smaller manufacturers are inspired by the bigger ones. For example, there are not many models that resemble the Huawei P20 PRO, also at the location of the main chambers. But this time, like the Ulefone, they have outgrown the measure.

Multi-camera smartphones have become the trend over the last few years and have become the standard. Nearly every high-end and mid-range smartphone has at least one dual camera at the start, and even in the entry-level segment, several camera sensors are gaining ground. Of course, the small Chinese mobile phone manufacturers also want to get involved and have been bringing corresponding devices onto the market for several years. However, as our test reports have repeatedly shown, most dual cameras are nothing more than fraud. Although almost all devices are actually equipped with two sensors, these often do not correspond to what is stated in the data sheet. Often you will find the cheapest VGA sensors which do not offer any added value. But even worse is the fact that in most cases the sensors are not even used. In the factory mode of smartphones, the additional cameras either don’t show up at all or simply don’t display an image. In the past, this was often due to the fact that the built-in processors could not handle dual cameras at all. But this has changed over time – fake dual cameras are still not extinct. What is sold as a bokeh effect on such devices is nothing more than a sharp, circular section with a blurred edge, which can be changed in diameter with a slider. A second sensor is not required and an algorithm for edge detection is not the basis.

Theoretically, there are 3 main photo cameras integrated into a plastic case. 12MP + 5MP + 5MP. We do not have to expect fantastic results from them, the Ulefone S11 uses a MT6580 processor, it was released in 2015! Probably the three cameras are real, I do not know if this chipset does support that. This processor has 4 Cortex A7 cores and runs at a 1.3Ghz frequency. RAM (1GB) is 32bit single-channel 533 MHz LPDDR2 graphics card: Mali 400 MP1.

The screen has a diagonal of 6.1″ and a resolution of 600 × 1280 pixels, including a waterdrop notch. It is interesting that Ulefone have managed to put an Android 9 Pie on this phone, as it is equipped with only 1GB of RAM and 16GB of internal storage.

There is also NFC, 3500 mAh battery, 3G Dual SIM connectivity, 8MP hard drive, 9.5mm thick phone, fingerprint sensor missing. For the time being, Ulefone did not announce a price for this model, but it would not cost more than 80USD.

Lately, one has to fairly acknowledge that several small Chinese mobile phone manufacturers are improving. Recently, more and more test devices from UmiDigi, Ulefone and Co. land in our test lab, which have real dual cameras at the start. The quality of the bokeh effect often leaves a lot to be desired, but at least the dual cameras are no longer a complete fraud. One could easily think that the small manufacturers have finally learnt their lesson and keep their hands off such scams, with which they are successful in marketing for the first time, but in the end disappoint and lose their customers. Wrong thought! With the recent up-and-coming trend towards triple cameras, the camera fraud of the Chinese now reaches the next level and one continues similarly as before. We already had a cheap Chinese mobile phone with a triple camera in the test once: the Elephone A5. The promised triple camera turned out to be a fake. In factory mode only two of the three rear sensors appear and can be tested successfully. If you dig further into the system, you will find an unconnected 0.3MP sensor for the third camera module. The front camera also turned out to be a fake. The second sensor with 2MP resolution is also not connected here and therefore does not output an image.