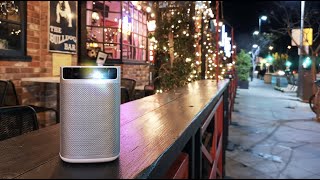 With an admittedly quite cool video, the Chinese projector manufacturer XGIMI introduces the portable Projector XJ03W MOGO. It comes in two different versions – the most interesting one is probably the Mogo Pro, which promises a real Full HD video picture for just 399 dollars. This in combination with Android TV sounds like an interesting deal!

The XGIMI XJ03W MOGO is a portable Projector that can be operated both by means of the integrated battery and a power source. The form factor is less reminiscent of a Projector than of a Bluetooth loudspeaker. And indeed – the audio technology is supplied by harman/ kardon (which doesn’t sound so special anymore, if you simply mention the name of the new parent company: Samsung).

So the XGIMI XJ03W MOGO is completely designed for use on the road. Simply switch on the beamer somewhere outside, set up a WLAN hotspot with your mobile phone and then start a movie via the Android TV system. In theory, it’s pretty cool – we’ll see how it works in practice.

We already know Android TV as operating system from the Xiaomi TV Box S or comparable boxes. It has developed well over time and is also used on Smart TVs from various manufacturers. Together with the huge selection of apps and games that can be started directly via the router, the Google Assistant is also on board. We also get to see it in the trailer on Indiegogo. Netflix series or YouTube videos can be started and controlled by voice command. Of course, the Android system also includes a Chromecast, so photos from the smartphone gallery can be displayed with a click on the Projector.