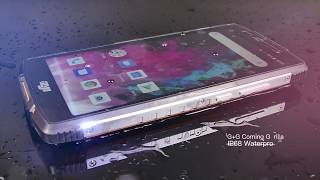 One of the special features of the Zoji Z11 is a 10,000 mAh battery that can keep the device alive for several days and can be recharged quickly thanks to the included 9V and 2.7V adapter. Of course, there is also IP-68 certification, while the display is a large 5.99″ IPS with an incell design to occupy a reduced thickness. The smartphone also uses a MediaTek octa-core processor with 4GB of RAM and 64GB of storage, comes with Android 8.1 Oreo and also has a face recognition system, in addition to the fingerprint sensor, to perform user authentication during unlocking.

Zoji Z11 implements a 16 MP camera on the back assisted by an additional module, while on the front we have a 13 MP sensor. The device is 16.1mm thick because of the reinforced hood, supports 4G networks on both installable SIMs and offers a native display resolution of 1440×720 pixels (derived from the HD, therefore). More information on Zoji Z11 on the official website.

Zoji Z11 is offered at $169.99 on Aliexpress until next January 10, with a discount of $30 on the price normally charged and $80 on the list price. It is a rugged smartphone to all intents and purposes, then reinforced to withstand not only the intrusion of liquids, but also falls and shocks of all kinds. It can also be used in extreme conditions, and does not fear moisture or use in extremely hot or extremely cold environments.