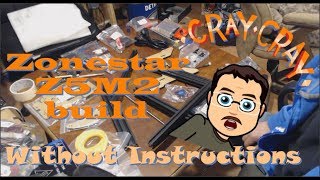 The ZONESTAR Z5FM is a low cost 3D printer that offers basic but sufficient features for those 3D printing enthusiasts who want an easy-to-install printer at an affordable price. It also allows printing using two colors simultaneously, which will allow to achieve models with a really attractive appearance. Today I want to tell you about its characteristics, so you can know first-hand the details of this interesting 3D printer.

Similarly, I invite you to take a look at another printer with similar features, it is the Anet E10, a quite silent 3D printer of which we have already told you before.

The ZONESTAR Z5FM is a printer with a design that does not stand out much to the naked eye, however, has an aluminum frame that makes it quite solid and accurate. The dimensions it has are 47.00 x 43.00 x 41.00 cm with a weight of 6.5 kg. It also has an LCD screen whose interface is available in 12 languages , and supports both printing from the USB (computer) port and from an SD card slot for user convenience.

Similarly, the most attractive feature of the Zonestar Z5FM is the ability to use two rolls of filament of different colors simultaneously. For its part, the printing area is of a medium size of 220 x 220 x 230 mm, so it is possible to make a large number of impressions with different dimensions without problems.

For its part, among the features of the Zonestar Z5FM 3D printer stands out the option of printing using two different colors of filament simultaneously, so that the possibilities at the time of getting innovative finishes are quite broad. In addition, thanks to the fact that it has an extruder temperature of 170 – 260°, a large number of filaments can be used, such as ABS, PETG, PLA, PVA and Wood among others.