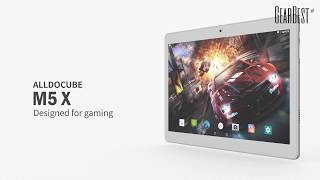 A few weeks ago we presented you the Teclast T20 in a short review and now I will introduce one of its competitor tablets: ALLDOCUBE M5X，because they have almost the same hardware parameters.

The case of ALLDOCUBE M5X is made of metal (back) and glass (front) and is only interrupted by a plastic strip on the upper edge and on the back, which houses the rear camera and probably the antennas. The edges of the white front have the following widths: 1.5 cm top & bottom, 1 cm left & right. This is not to be seen as negative, as you can hold the device reasonably and safely. In landscape format the upper and lower edges could certainly have been made a bit narrower. In any case you get a lot of display and very little edge with the M5X.

The silver Uni-Body metal case has clean curves on the 4 corners and is not to be complained about. The ALLDOCUBE M5X creaks slightly during the torsion test and there are slight gaps at the corners under slight pressure. The case edge pointing towards the display is slightly sharp-edged, but this is due to the milled 1mm wide edge and wasn’t a disadvantage for me during the test.

The front is dominated by the 10.1 inch “Full Laminated” display and only the front camera and the brightness sensor interrupt this design. The display distance to the white frame around the same is not quite successful, as you can see about 1mm thick, black edges all around when the display is switched on. This can be solved better.

The rounded frame has only a loudspeaker grille on the left and right and a microphone opening on the lower edge. On the left upper left corner there is the headphone socket and the slot for the SIM card (Nano-Sim) and the memory expansion (Micro-SD). All other controls can be found either on the top edge or on the back. On the right side at the upper edge is the volume control and the on/off switch. At the left upper edge there is the charging socket (USB-C). As already mentioned, the back contains the rear camera (somewhat edgy in a plastic strip), the ALLDOCUBE lettering, some technical details, such as the serial number, exemplary lettering on the sockets/HW keys and a fingerprint sensor, but more on this later. The keys have a good pressure point, but the volume rocker wobbles too much for me personally and has a slight inclination to the “louder side” and then doesn’t go back to the original position. Of course, this has no effect on the operation.

The dimensions of the device can be described as slim, because we are here at 24.0 cm in width and 17.0 cm in height. The depth of 7.90 mm with slight pressure of the caliper up to 8.05 mm without pressure can be rated as very slim. Due to the rounded case edges on the back side, the device looks even slimmer. In comparison, a 9.7 inch Ipad 2018 is slightly thinner, but also slightly larger in terms of dimensions. The weight of 510 g is okay – no top value, but not bad either.

The laminated IPS 10.1 inch display (according to the manufacturer) impresses with its resolution of 2560×1600 pixels. The measured display size (21.9 cm x 13.7 cm diagonal 25.8 cm) even results in a calculated 10.2 inch display with an aspect ratio of 16:10. This results in 296 PPI. A good value and the resolution of the display proves to be very good. The brightness is very good and covers all areas. Thus, it is still readable even in direct sunlight. The viewing angle stability is very good but in sunlight the display reflects a bit. Unfortunately, fingerprints are clearly visible in daylight, which means that the promised “Anti Fingerprints” coating is only a marketing gag. The colors are natural and can also be further adjusted via Mira Vision. The brightness sensor works well and quickly.

All in all, you have to say, a wonderful display with strong colors and according to my above description even slightly bigger than the manufacturer’s specifications. If you can criticize something on the display, then it’s only that the white representation is not really white, but has a slight grey shimmer. Furthermore, one has to mention the general coloring, which generally made the colors look very red-heavy in the model I have at hand.

The ALLDOCUBE M5X is equipped with a Mediatek Helio X27 (MT6797X), 4GB RAM and 64GB memory. The ten-core processor is no longer part of the current generation, but it is by no means a slower version. The X27 uses a Mali T880 as its graphics processor.

This chipset performs pretty well in benchmarks like Geekbench 4 and AnTuTu. In the latter it is even faster than most Android tablets, except for the flagships of Huawei and Samsung. In real use, however, the performance is not quite as good and more comparable to a normal mid-range tablet. That’s how it is priced.

I am very happy that the ALLDOCUBE M5X tablet comes pre-installed with the Android 8.0 system. At delivery 6.5 GB of the 64GB memory are occupied. This is basically good and “Bloatware” or any Chinese apps have been omitted completely. Instead, there are only 2 “special apps”: System update and the ALLDOCUBE Manager, which obviously represents a slightly different form of the standard menu item “Apps”. The deeper sense has not yet opened up to me, but if necessary you can deactivate individual apps here. The tablet has no setup routine after the reset and you have to add the languages manually in the menu and can then switch from English to other languages during operation.

So, how does the ALLDOCUBE M5X score overall in my test? Considering the price, especially the display, but also the workmanship are great. The performance isn’t quite as good as the benchmarks suggest, but for the price it’s a good gaming tablet. It’s also really nice that we get a fingerprint reader. It’s usually not available at that price.

Well, I can recommend the ALLDOCUBE M5X if you are looking for a very high-resolution display, solid performance and a fingerprint scanner for less than $200. And if you might need LTE from time to time. Since it is so cheap, the price/performance ratio is actually quite good.