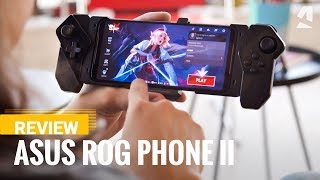 Asus has introduced the ROG Phone 2, its second gaming smartphone. In addition to a drilled-out top chipset and overclocked GPU, it offers a rechargeable battery with 6,000 mAh and sensor keys in the frame.

With the ROG Phone 2, Asus has introduced the successor to its gaming smartphone, which made its debut last year. The Taiwanese have also trimmed the new ROG device for maximum performance and turned a few adjustment screws to adapt it even better to the needs of gaming enthusiasts. In addition to a drilled-out top chipset and a more powerful graphics unit, this also includes a 120 Hz display and a lavish battery. A special feature of the ROG Phone 2 are the pressure-sensitive keys (called air triggers) on the upper long side.

In terms of design, Asus is slightly following its predecessor, which was just as slightly martial. Front and back of the ROG Phone 2 are clad in black Gorilla Glass 6. The back is interrupted only by an air inlet for cooling the device and by shimmering lines. The ROG logo is emblazoned in the middle and starts to glow in gaming mode.

The device with which we could spend a few hours on site had a dark grey tone. As far as the colour for European devices is concerned, Asus told us that a matt black would be used.

The first time you pick up the ROG Phone 2, you’ll be impressed by the sheer size of the smartphone: At 171 x 78 x 10 millimetres, these are even more expansive than the equally short Oneplus 7 Pro at 163 millimetres. The Asus phone doesn’t have IP protection against water and dust, by the way.

Also the weight of 240 grams is really not a cardboard stick. Fortunately, the smartphone doesn’t hold itself in the hand like a brick, but is quite well balanced. The center of gravity of the ROG Phone 2 is chosen so that it is easy to use in landscape format. And so it should be used most of the time while playing.

The sensor keys integrated into the top of the frame fit perfectly. These can be assigned functions depending on the game and individually. They transform the phone into a kind of gamepad and actually simplify control enormously when playing. Now you don’t have to take your finger off the button: A light press is enough to execute the configured action.

The reason for the ROG phone’s expansive dimensions is the 6.59-inch OLED display, which Asus has stretched compared to its predecessor at the request of its gaming community. It has a resolution of 1,080 x 2,340 pixels and accommodates an optical fingerprint sensor. With a display diagonal of 19.5:9, there’s also room for two full-blown stereo speakers on the front, which, by the way, put a lot of pressure on it.

But what’s special is not the speakers, but the display’s refresh rate, which at 120 Hz is unmatched in the smartphone world for OLED panels. Especially in fast racing or action games, this leads to an even smoother display. OLED technology ensures very good contrasts. Asus also calibrates the colors of each individual screen before delivery, which also covers a fairly large color spectrum with 10-bit HDR.

On top of that, the Taiwanese have turned on the screen’s reaction time, which is now 49 milliseconds. Asus names a value of 85 milliseconds as a comparison for the Oneplus 7 Pro, which would definitely be an improvement.

In short, we liked the display very much when we played it. Contrasts and colors were also very good at first glance. We didn’t notice a huge difference between a 120 Hz and 90 Hz refresh rate, but you’ll probably have to play longer for that. It all went smoothly.

This is also ensured by the drilled Snapdragon 855 Plus in the ROG Phone 2, whose clock rate has been tuned from 2.8 GHz to 2.96 GHz. This makes it the fastest mobile chipset on the market. The adreno-640 graphics unit, overclocked from 585 MHz to 675 MHz, also offers 15 percent more performance than usual. The system is completed by 12 GB RAM and up to 512 GB memory. The benchmarks presented by Asus make the ROG Phone 2 by far the most powerful smartphone currently available.

In the 3DMark Sling Shot Extreme it should score 6253 and outperform the Oneplus 7 Pro (5579 points). We haven’t been able to verify this yet, but we will do so during the test.

We didn’t have any jerkers during the first test, either while playing or navigating in the system. Everything ran very smoothly and extremely fast. Apps were also opened quite quickly.

Connectivity is also a matter of substance. Asus relies on the fast 802.11ad standard and also uses four WLAN antennas. This means that the ROG Phone 2 should have optimum reception in every orientation.

Such a potent system naturally produces a lot of heat, which is dissipated to the outside through various paths including a ventilation slot. This also includes a fan that can be plugged onto the smartphone and thus ensures active cooling.

Two additional USB-C ports have been added to the long side to supply the fan with power. In addition, the smartphone can also be charged while playing without the cable interfering. A 30 watt power supply is used.

As far as the battery is concerned, Asus relies on a 6,000 mAh energy bar. This should be able to compensate for the high frame rate, which requires a little more power. We can’t say anything at runtime yet, we’ll determine it in a full test.