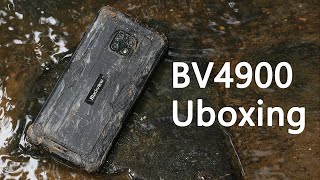 The new Blackview BV4900 Pro was launched in December 2020. The smartphone features a 5.7-inch screen with a resolution of 720 x 1440 pixels. It is powered by a MediaTek Helio A25 MT6762V 64-bit chipwith a 2.0 GHz Quad-Core + 1.5 GHz Quad-Core distribution. By using more cores, the device is energy efficient and can increase in speed. Rugged phones are often much thicker than regular smartphones, including this device with a thickness of 13.7 millimeters.

The BV4900 Pro has a 13MP camera. This number of megapixels is more than enough to print beautiful photos on canvas or to greatly magnify details. For example, you can also use the 5-megapixel selfie camera for video calls.

It supports frequencies from international networks with which you can use mobile Internet via HSDPA (slightly faster than 3G). The speed of HSDPA is perfect for Internet use on the road where the speed doesn’t differ much from regular WiFi at home. You can also connect via WiFi at home or in the office. This phone is a dual sim device, so you can store two SIM cards inside it.

The Blackview BV4900 Pro has 4GB RAM and 64 GB of internal storage. Expandable memory: microSD up to 128GB. There is a USB connection, you can use it to exchange data with your laptop or charge your device. Connecting a Bluetooth headset or car kit is not a problem.

With 64GB of memory, you can go a bit further. You may need to clean the phone after a while. In addition, there are of course possibilities to expand the storage space in the cloud, for example with Google Drive or Dropbox.