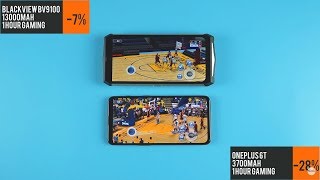 Among the Chinese Rugged smartphone manufacturers, hardly anybody is as present and productive as Blackview. Now the next prank awaits us: the Blackview BV9100 even offers a 13,000 mAh battery!

The Blackview BV9100 is once again an outdoor smartphone, which also shows this claim. It adapts the current 6.3 inch display diagonal, but there is a massive case around it. The screen edges around the IPS panel with Full HD+ resolution are already relatively thick, but then follows a metal-plastic bumper, as you know it from other outdoor smartphones. Due to the waterdrop notch at the top of the screen, the BV9100 looks pretty modern.

This look is consistently continued on the back. The dual camera has been embedded in a solid metal module, which is fixed with four clearly visible screws. A carbon strip runs along the middle of the back, the Blackview logo is at the bottom.

The volume rocker and the power button decorate the right side of the metal housing frame. There you can find the “Dustproof” note and even the fingerprint sensor. It’s not uncommon for outdoor smartphones to install this on the side. In fact, the Blackview BV9100 is waterproof and dustproof according to an IP69K rating and is also said to come off unscathed in falls from a height of 1.5 m. The Blackview BV9100 is also waterproof and dustproof according to an IP69K rating. In addition there is a high temperature tolerance. The BV9100 survives a cold of up to -55°C and an extreme heat of 70°C. The BV9100 is designed to withstand the cold of up to 1.5 m.

The Chinese manufacturer has installed the MediaTek Helio P35 processor, which we know from the Oukitel K9, for example, on the circuit board. The Octa-Core is designed for beginner smartphones and offers sufficient performance. With the 4 GB main memory and 64 GB internal memory, one is prepared for everyday life, but gaming or video and image editing will cause the CPU to stumble.

But the big strength of the BV9100 is another, the battery. With a capacity of 13,000 mAh, you have a power bank in your hand. That’s why the OTG support also makes sense, so you can easily charge two other smartphones and still have enough juice for one day. E.g. gambling and video streaming over a period of four hours only uses about 20% battery charge. The battery can even be charged with 30W.

We hope that the 16.0MP camera on the back of the BV9000 camera can do justice to it. This could surprise us at that time in the test. However, the Sony IMX297 sensor, which was already used in the OnePlus 3T, is used here – not exactly up-to-date. The secondary sensor with 0.3MP resolution can be safely ignored, but the 16MP front camera sounds relatively promising.

Android 9.0, of course, functions as the operating system, but the manufacturer has adapted it accordingly. This includes own apps that fit to the outdoor theme, but also the look is different.

If a robust design and a long battery life are important to you, the Blackview BV9100 seems to be a good choice. But I don’t like the processor, even though it’s more than enough for normal applications. The other features are fair, especially NFC and a Full HD+ display are not standard for outdoor smartphones. We haven’t tested any outdoor smartphones in a while, would the BV9100 be worth a test again or can you think of a better alternative?