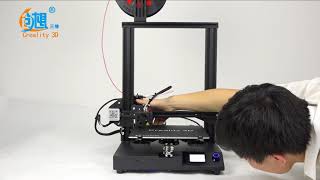 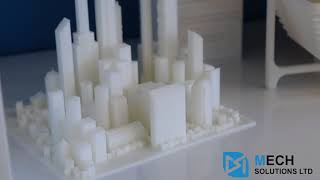 For a very long time he had the idea of ​​buying a 3D printer. That the price of consumables stopped (about $25 per kilogram), then the quality of printed parts frightened off. But recently I came across a review of the printer Creality3D. A plain printer seemed to be giving decent results right out of the box.

The printer arrived in a cheap carton. The inscription on it read: Creality3D CR20. Fortunately, everything inside was pretty civil. Everything is laid with a thick layer of foam rubber (foamed polyethylene), the parts in separate compartments, nothing hanging, everything is packed very carefully. That’s just the smell from this foam rubber (which is polythene foamed) was pretty strong. I had to take out the box on the balcony.

The printer comes with a memory card. It contains files and programs necessary for the assembly and operation of the printer. Naturally, everything is in English.

To put it bluntly, the instructions are made in a hurry, but they are enough to assemble the printer. Assembly of the printer takes 30 minutes. This is if you do not hurry.

There was only one problem with the assembly. One drive screw on the Z axis did not fit into the clutch fixed to the stepper motor. The spring clutch compensates for misalignment, but in my case, it was about 5-8 millimeters. In the figure, this is clearly visible.

First of all, I aligned the X-axis profile with respect to the lower frame. The figure shows the dimensions that I controlled. Measurements were carried out by an ordinary rod. After adjustment, it is necessary to fix the screws of the Z axis with locking screws on the couplings.

Before printing, you need to fill the plastic bar. For this, I heated the nozzle, put the rod into the feeder and turned on the feed. I had to wait a bit until plastic came out of the nozzle. Then he removed the “snot”, put a molar tape on the table and transferred the system to its original position.

For the first printing I used a ready-made control program from a USB flash drive. This of course was a reckless step, because I did not know what kind of print settings are laid out in this file. But then I did not know about it yet. Here’s what happened:

I think for the first time the result is excellent. But the quadcopter printed by me on this printer:

In conclusion, I want to say that I did not regret buying. Creality3D CR20 is an excellent printer for printing at home.