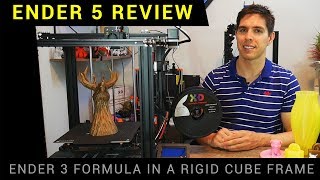 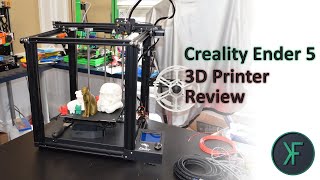 The Creality3D Ender-5 3D printer is often called an intermediate model between the Ender 3 and the CR20 of the same manufacturer. The manufacturer himself likes to call it “the next step in the development of more economical 3D printers”. In some points the Ender 5 does justice to this motivated advertising slogan. Thus, the assembly of the 3D printer can be realized very well within one hour on the basis of the assembly instructions – experienced users create the assembly even faster. The Ender 5 also has some interesting technical features, such as the patented MK-10 extruder.

Since this 3D printer has a lot of individual parts that have to be assembled by hand, the construction of the machine is not quite as quick. Those who have not yet dealt with this technology should plan 1 to 2 hours for the assembly. As we have already assembled and tested some 3D printer kits and the instructions also show the assembly very well, we managed with 50 minutes, but had already unpacked the components and checked them for completeness.

The individual parts are packed separately. Screws, nuts and other small material, but also the tools are packed in separate small bags. In contrast to the predecessor model Ender 3, the power supply has to be mounted at the back of the Z-axis and not externally. The bottom, which has the shape of an “H”, seems a bit unusual to us. It consists of rectangular screwed aluminium profiles with a thickness of 40 x 40 mm. Both the base plate and the hot end were delivered pre-assembled.

If you have an extensive collection of tools yourself, you will certainly be able to use them during assembly. The supplied tools are sufficient for the assembly, but only a few can be used for continuous use.

After we had assembled the Creality3D Ender-5 and connected the cables correctly, we noticed that the model was shaking. Here it was necessary to readjust some screwings of the base plate and the heating bed (Hotend) in order to make an optimal stand possible.

Unfortunately, this 3D printer does not have an automatic levelling function. Therefore, we had to reach for a piece of paper and readjust the printing area with the large adjusting screws. A print file was already stored on the enclosed SD card. This is a small bear. We decided to print this bear with ABS filament. We chose a heating bed temperature of 60 degrees and a nozzle temperature of 240 degrees. In total, the 3D printer took about 5 1/2 hours to complete the figure. Some overhanging threads could be easily removed by hand. We used the supplied spatula to carefully separate the object from the printing plate. This succeeded without any problems.

We were very satisfied with the surface quality of the printed bear. Next we built the Benchy ship, which also convinced us. Also in comparison to other, partly higher priced DIY 3D printers, the quality is amazing. In the meantime, we have also realized a few more objects and are very enthusiastic about the price-performance ratio of the Ender – 5.

Overall, the Ender 5 makes a very solid impression on us and once again confirms that Creality3D is one of the Chinese manufacturers whose inexpensive 3D printers can be recommended to others. It offers an innovative design and a very good workmanship. At the same time, according to the manufacturer, it represents the next stage in the development of more economical 3D printers. Some elements of the predecessor model Ender 2 and the somewhat larger Creality3D CR-10S were taken over by the Ender 3. The construction of the 3D-printer can be realized very well within one hour with the help of the construction manual. At the same time newcomers get to know the functionality of a 3D printer.

We were also impressed by the print quality of this 3D printer. If you’re looking for a high-quality 3D printer and can’t invest too much money in it, we highly recommend the Creality3D Ender 5. The Ender 5 can also be used as a second device.

Again and again we get vouchers from the 3d-limitless magazine for the Ender 5, which enable you to purchase the presented 3D printer, but also numerous other 3D printers even cheaper than in the following price comparison anyway to find. Take a look at our current coupons from time to time and use them to save money when buying a new 3D printer. You can then use the saved money to purchase a roll of filament, for example.